Akzo Nobel to sell or spin off chemicals division 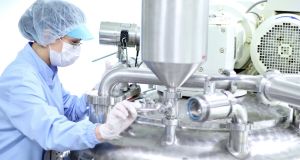 Akzo Nobel, battling an unwanted $24 billion (€22.4 billion) approach from PPG Industries, will sell or spin off its chemicals division and return €1.6 billion euros to shareholders as part of chief executive Ton Buechner’s plan to break up the centuries-old paintmaker. (Photograph: iStock Photo)

Akzo Nobel, battling an unwanted $24 billion (€22.4 billion) approach from PPG Industries, will sell or spin off its chemicals division and return €1.6 billion euros to shareholders as part of chief executive Ton Buechner’s plan to break up the centuries-old paintmaker.

The separation of the speciality chemicals business will be carried out within 12 months and the “vast majority” of net proceeds will be returned to shareholders, the Amsterdam-based company said in a statement on Wednesday. The payout to investors for this year will include a €1 billion special dividend as well as a 50 per cent rise in the regulator one.

“The supervisory board believes that management’s plan for Akzo Nobel’s future will deliver superior shareholder value compared to the alternatives,” chairman Antony Burgmans said in the statement.

Buechner is unveiling his plan at an investor day in London and could find it a tough sell. The 51-year-old Dutch national needs to convince those shareholders urging Akzo Nobel to negotiate with PPG that separating out the chemicals division would create more value, with less risk. Akzo Nobel has twice rejected approaches from its Pittsburgh-based rival, saying the latest proposal is too low and not worthy of discussion.

Recent developments have taken a more hostile tone, with PPG CEO Michael McGarry appealing directly to Akzo Nobel shareholders with his rationale for the deal, and activist investor Elliott Management seeking to force a special shareholders meeting to oust the company’s chairman.

The Dutch company will run a dual-track process to consider separating out the speciality chemicals business through a listed entity or a sale, the company said on Wednesday. Akzo Nobel also outlined improved financial guidance as well as €150 million annual cost savings and an extra €50 million in savings from the proposed carve out.

“Now is the right time to create two focused, high-performing businesses,” Buechner said. “This strategy will create substantial value for shareholders with significant less risks and uncertainties compared to alternatives.”

The Dutch company reported better-than-expected results in the first quarter. Earnings before interest and taxes through March jumped 13 per cent to €376 million, versus an average estimate of analysts of €338.8 million compiled by Bloomberg.

PPG has outlined $750 million in cost savings from a combination with Akzo Nobel at a time when prices for raw materials including the widely used TiO2 white pigment is on the increase. Chief financial officer Maelys Castella said today the company is putting in place its own savings measures to deal with inflation.

The Dutch maker of Dulux and Sikkens paint set a target of 15 per cent return on sales by 2020 for its paint and coatings business, and a return of 16 per cent for speciality chemicals, it said, predicting its third straight year of record profit.

Shares of Akzo Nobel closed Tuesday at €78.32, valuing the company at almost €20 billion. The stock has risen 39 per cent since the PPG bid became publicly known on March 9th. The US company is scheduled to report quarterly results on Thursday.

1 Who are Ireland’s 17 billionaires?
2 Are there annual limits on inheritances or gifts to a child?
3 Fianna Fáil may have just pressed the pause button on the property market
4 UK to prioritise EU trade deal over one with United States
5 O’Flynn ‘very unhappy’ with extra payments to former employee, court hears
6 Eason puts Blanchardstown store on market at €16m
7 My father in a nursing home wants to gift me his house
8 IDA chief says State could soon ‘be fighting for a smaller pool’ of foreign investment
9 Mixed-use investment in Greystones town centre guiding €5.5m
10 DNA collection company Genomics Medicine Ireland reports €37.7m loss
Real news has value SUBSCRIBE