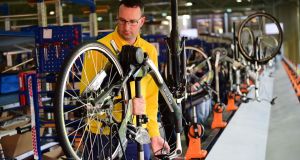 Accell Group, the maker of Dutch bicycle brands Sparta and Batavus, said on Tuesday it had received a takeover proposal that values its stock at €845 million from investor Pon Holdings

Accell Group, the maker of Dutch bicycle brands Sparta and Batavus, said on Tuesday it had received a takeover proposal that values its stock at €845 million from investor Pon Holdings.

If successful, the merger would create one of the world’s largest makers of bikes and electric bikes and bring more than a dozen brands together.

“After a detailed assessment of the strategy and performance of Accell Group, Pon Holdings has concluded there is an excellent strategic fit between the bike activities of both companies with benefits for all stakeholders. The combination results in the world’s leading global bicycle company,” Pon said in a statement.

Pon is a diversified trading and distribution company in the transportation sector which also owns Gazelle, the biggest Dutch bike manufacturer. It has been steadily building its other holdings, notably in electric bikes.

Accell said it was studying the non-binding €32.72 per share proposal, which represents a 27 per cent premium to its closing price of €26.53 on Monday.

It said it is in talks with Pon and that there was no guarantee that the negotiations would lead to a deal.

Accell sold more than a million bikes last year and recorded a profit of €32 million on sales of €1.05 billion.

Its best-known brands include Haibike, Ghost and Winora in Germany, Lapierre in France, Raleigh and Diamondback in Britain and the US, Tunturi in Finland and Atala in Italy.

Pon bought Gazelle and Union in 2001 and Derby Cycle, Germany’s biggest bike maker, in 2013, bringing it the Focus, Kalkhoff, Univega and Rixe brands.