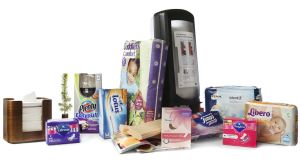 SCA is the world’s largest maker of incontinence pads and the second-largest in consumer tissues such as napkins and toilet paper.

Shares of Sweden’s SCA touched a record high on Thursday on a media report that a group of private equity firms had bid 200 billion crowns (€20.8 billion) for its hygiene products arm, a top global producer of diapers and toilet paper.

Swedish daily Dagens Nyheter, citing unnamed sources, said at least two international private equity firms had jointly bid for the hygiene business a few weeks ago. It did not name the bidders.

Last week, SCA formally approved a proposal to spin off its hygiene products business, to be called Essity, as a separately listed unit, leaving the forestry business under the SCA name.

SCA, the world’s largest maker of incontinence pads and the second-largest in consumer tissues such as napkins and toilet paper, declined to comment on the bid report.

The hygiene business accounts for the bulk of SCA’s value.

The report did not say whether the 200 billion crown figure represents the suitors’ basic valuation or total enterprise value, which also includes debt. – Reuters

1 ‘No demand... because there are no people’ at well-known Dublin pub
2 HSE says fix for Covid Tracker app has been rolled out to all Android users
3 Buying a second home now that we work from home
4 Nearly 30,000 could lose pandemic payment if they do not confirm eligibility
5 Face masks developed in Ireland could help meat-plant workers
6 Shelbourne Hotel operator Marriott posts bigger-than-expected loss
7 McDonald’s sues former CEO over alleged sexual relationships with employees
8 Bank of Ireland does U-turn after refusal to reimburse ‘smishing’ victims
9 Survey finds ‘huge appetite’ for remote working
10 Spare me the city-dweller’s longing for a rural idyll
Real news has value SUBSCRIBE

HSE says fix for Covid Tracker app has been rolled out to all Android users 20:04
Shelbourne Hotel operator Marriott posts bigger-than-expected loss 19:26
‘No demand... because there are no people’ at well-known Dublin pub 19:10
Bank and energy stocks lift European markets 18:37
Arkle Resources resumes field work at sites in Wicklow and Donegal 18:22
Search executive
jobs on irishtimes.com