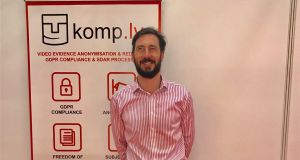 Wesley O’Brien, founder Komply Privacy: ‘Our services are of value to any organisation with a CCTV system but to date we have focused on high footfall environments such as the retail and hospitality industries.’

CCTV is one of those things that many businesses put into their premises and promptly forget about. They see it mainly as a deterrent and don’t think about it until there’s a problem. However, this fit-and-forget approach means that cameras are not always well maintained. One or more may be faulty or out of action and this suddenly becomes an issue if the footage is needed to substantiate a criminal charge or defend an insurance claim.

Being unable to call on relevant CCTV evidence could be a costly lapse in housekeeping, according to Wesley O’Brien, founder of the video evidence management platform Komply Privacy.

“Our platform enables organisations to use their CCTV efficiently and effectively to dramatically reduce their exposure to a data breach, to share evidence, mitigate risk, fight spurious or questionable claims and ultimately save both time and money,” O’Brien says.

“We redact footage as required under GDPR, store it securely, facilitate compiling and sharing and build a log that will confirm its veracity and that it hasn’t been tampered with. Effectively, our system creates a ‘chain of evidence’ that collates who viewed what, when, and for what purpose. This chain is particularly important if litigation is involved.”

O’Brien comes from a retail background so he’s very familiar with the sort of situations where CCTV can be invaluable and in early 2018 he began kicking the idea for Komply around with some friends who had technical and start-up experience respectively. O’Brien had studied business and law and had always been interested in starting a business that combined his academic and retail knowledge and after six months’ market research, Komply Privacy launched its initial service in October 2018 covering areas such as GDPR compliance, CCTV anonymisation, redaction and face blurring. Since then, O’Brien has been focused on building his customer base and developing the company’s service into a full interactive platform that will be launched this summer.

“One of the issues with CCTV footage is that it is often shared widely, especially if there is a legal case pending, and the more copies out there the greater the risk of privacy breaches. Under GDPR that can mean an expensive fine,” he says.

With the Komply platform the footage is only uploaded once and the relevant parties log in and access it online. They can also use a facility on the system to leave comments or notes. Initially, the business was GDPR-led but its base has since broadened and it is now feeding into other areas such as smart cities initiatives being taken by local authorities. Street-facing cameras can provide good information about pedestrian movement or traffic use and can also be of help to the Garda. O’Brien believes the smart cities side of the business will grow strongly as the whole area of personal mobility and environmental footprint continues to evolve.

“Our services are of value to any organisation with a CCTV system but to date we have focused on high footfall environments such as the retail and hospitality industries,” he says. “Contracts here have led to business in the UK and our system is also applicable in Europe. However, because of the Brexit situation we will have to wait and see what way they jump on data privacy.”

The company’s pricing is linked to the type of service required but most of its business is repeat and long-term so price packages are tailor-made. Komply has been a bootstrapped start-up with costs to date contained at about €30,000.

O’Brien didn’t take a salary and kept body and soul together with the small stipend he received as a participant in the New Frontiers programme at TU Dublin Hothouse. The business has been generating income almost since the get-go with revenues ploughed back into funding its ongoing development.