The shoes are strapped to your feet, and when used with a swivel chair they can immerse you in a game with no restrictions 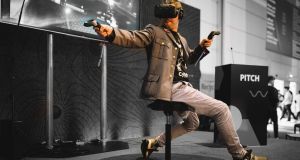 Cybershoes in gaming “allows you to literally walk, run or flee through virtual reality”

You know how it is. You sit down to play your favourite game in your virtual reality headset, and all of a sudden you want to leap off the chair and make a run for the wall. In most cases that could end badly, but thanks to an Austrian architect, who stumbled upon the gaming world quite by accident, frustrations and accidental bruising can become part of the past as he introduces us to total VR immersion.

Being an architect, Michael Bieglmayer, founder and chief executive of Cybershoes, felt that there had to be a way he could walk through his plans. Using only a VR headset inside an office space could prove restricting to the experience he was looking to achieve.

“Being able to walk through something that we can build was something that interested me. The problem was the scale because you can’t work an airport in your office, so that’s why I started to research the treadmill and different ways to walk [in virtual reality]. We had started in the workshop and were producing a standing solution for the Cybershoes like a treadmill – it was too bulky and heavy.”

This also included a harness, and Bieglmayer felt it took too long to set himself up to and prepare for his VR walk. On hot days in particular the gear was rather uncomfortable.

“One day in summer it was very hot. I was just delayed by stepping into the harness and getting up from my desk and getting involved in the bulky treadmill, so I put the metals under my desk and started to use the Cybershoes while being seated. And I understood this could be made way more simpler just from the comfort of the chair.

“When we took the Cybershoes prototype for the first time to public events the people that were trying it just told us this is fine but they wanted it for gaming. The architects, they hadn’t even arrived in virtual reality and making them understand with VR – there are gamers out there that already know the problem, and were really yearning to roam freely in games.”

Bieglmayer began developing Cybershoes for the gaming market, and came up with a prototype which can be “worn on your feet, and allows you to literally walk, run or flee through virtual reality”.

They are strapped on to your feet, and when used while seated on a swivel chair they can total immerse you in the game with no restrictions.

“They are compatible with any VR game and function with StreamVR, The HTC Vive, Oculus Rift, Windows Mixed Reality and Primax. All of your movements are controlled by your own physical movement, so you can feel like you’re exploring ancient dwarven ruins or fleeing from a grasping horde of the un-dead.”

All of the tracking is contained inside the Cybershoes, setting them apart from similar products, according to Bieglmayer. “It means you don’t need extra cables or external sensors to set up. It’s easier because you have the Cybershoes and the sensors work inside, so that makes it independent from the headset and the technology inside it.”

There are two different kinds of sensors, one detecting the speed of the movement and the other which detects the direction.

“One sensor is a roller, and the advantage of the roller is that it’s an analogue system. It’s very exact so a small movement can be detected with this roller and also fast movements.

“It’s analogue and that’s why it’s more and more accurate than other systems, and each time you have contact with the ground it gives the depth of the step – that is way more reliable than other things we tested.

The other sensor is the directional sensor allowing you to walk in the direction that you point the shoes. When used with a swivel chair there is no restrictions on direction. Another thing this allows you to do is look in a different direction while on the move – no more needing to grind to a halt.

Now that they have found their target market – and a live demo at the recent Webit festival proved that alterations to allow for more grip with the floor for swivelling have been a success – Cybershoes are finally beginning production.

Although they are predominantly targeting the games market at the moment they have had interest from the healthcare sector due to the low-impact exercise that one gains using the shoes.

“For rehabilitation of strokes or for elderly people to be more active, and it’s something we see way more interest than from the architects. It’s something that interests us a lot, and where we see good potential for to do something good.

“And because, I mean, just in general also for the gamer it means you can be more active. But this notion of fitness, so you can engage in the game, and this makes it of course more immersive.

“With VR the more immersive it becomes – when you have to walk just using you fingers, that’s just not the natural way to do it.