How lost charity money led to an award winning idea

From securing aid to refugees in Syria to a 'fitbit or the brain' and the 'Airbnb of parking', awards for bright new ideas from Irish innovators 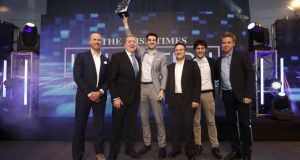 Joe Thompson completed the renowned 151-mile Moroccan desert marathon in 2009, collecting money for charity. Then the money he raised disappeared.

First-hand experience of a seemingly common problem for aid organisations and charities led Thompson and his colleague Niall Dennehy to consider the security benefits of blockchain technology for such transactions.

“We asked ourselves if we could use it to bring transparency to international aid,” Dennehy says. “We found out that 30 per cent of international aid goes missing each year and we developed a solution which could verify to donors that their money has gone where it was intended.”

They approached the Irish Red Cross with the technology and partnered with them to deliver aid to Syrian refugees. Once the aid or government agency has created a digital identity for the individual recipient, the recipient stores these details in a QR code on their mobile phone or, if they don’t have one, a plastic ID card. All the usual anti-money laundering systems are in place as part of the verification process. To receive aid they simply scan the QR code. This gives full end-to end visibility from donor to recipient.

The company became the first in the world to deliver international aid using blockchain technology to Syrian refugees in northern Lebanon. According to Dennehy, Aid:Tech’s chief operating officer, there are 2.4 billion people around the world with no legal identity. This presents huge difficulties in providing them with a range of benefits such as welfare, medical entitlements, remittances, healthcare, aid and peer-to-peer donations.

The Aid:Tech platform allows for the creation of a secure identity for an aid or welfare recipient, which is stored on a blockchain ledger and can’t be subsequently altered or erased. Aid in the form or vouchers or actual cash can be sent via the platform completely securely with an unalterable record of receipt, thus helping address corruption and improve efficiency.

There are also plans to roll out the technology in other areas. “It can be used to help people around the world to participate in the digital economy . . . People will be able to use it to gain access to micropayment services, banks and so on,” Dennehy said.

Aid:Tech’s solution to a global problem won over the panel of judges in the final round of this year’s Innovation Awards, and on Tuesday night at the RDS Dublin their platform was named Overall Innovation of the Year 2018.

If there was an over-riding theme to this year’s Innovation Awards entrants, it was creating solutions to society’s problems. From housing to healthcare, climate change to charity, the 15 finalists in this year’s awards aimed to tackle some of the toughest problems facing society today.

Speaking at the awards, David McWilliams, Irish Times columnist and MC for the night, reflected on the awards setting, in the RDS library, set up to celebrate, document and dignify the extraordinary creativity we have in literature in Ireland. “It’s so interesting to look at the RDS library and the great writers and the great artists, because these type of people, the great artistic brains, are exactly the same as the great entrepreneurial brain. I believe that innovators who involve themselves in commercial self-expression have exactly the same type of characteristics as artistic innovators who involve themselves in literary or artistic self-expression.”

He said that innovators “want to create something new, something different and something that could even change the world”. “At the core is this desire for self-expression, this desire to innovate, to see something, to see what might be wrong with it and to make it better. These awards seek to celebrate the extraordinary minds and efforts that go into moving from an idea and question to getting it financed, to getting a prototype, to beginning the process of commercialisation, to be able to big enough to face the competition and say: ‘No, I’ve got a better way of working.’”

“I think in the next phase of Irish development we are going to see commercial innovation on a par with literary innovation and our cities are going to be monuments in the future to the changes these innovations bring.”

Aid:Tech won the IT and Fintech Award, sponsored by KPMG, before going on to claim the top accolade ahead of four other category winners.

Other winners included Parkpnp, which describes itself as the Airbnb of parking, which won the Innovation award in the Sustainability category. Parkpnp users can rent out car-parking spaces by the hour, day, week or month, and cash in on hitherto underutilised assets. The company has now expanded into the Belgian and Dutch markets, while it is looking to conduct its first trial in the United States shortly.

Innopharma, which is based in Sandyford in Dublin, won the Manufacturing and Design Award for its work on modified-release drugs, specifically the development of a system which enables the uniform application of coatings to the active ingredients contained within a tablet or capsule.

BidX1 won the New Frontiers category for its transparent and trusted online auction system which enables people to buy or sell property from anywhere in the world. The company says the key advantages of their system are efficiency, accountability and accessibility. While the typical residential sales process takes 28½ weeks, on BidX1 it takes an average of nine and a half weeks.

Belfast-based BrainWaveBank won the Life Sciences and Healthcare award for its ‘fitbit for the brain’ which has the potential to enable much earlier diagnosis of Alzheimer’s and other degenerative brain diseases with a view to facilitating earlier and hopefully more effective treatment of these conditions. The technology has been proven in a number of demonstrator trials and the company has just been asked by the Northern Ireland department of health to work on research into pre-psychosis in teenagers.

The awards, which are now in their ninth year, were presented at a ceremony attended by more than 200 people at the RDS concert hall last night. More than 270 companies registered for the awards this year. Some 87 final applicants made it to the first round of judging. This panel comprised Lana Briggs of KPMG; Lisa Higgins of Science Foundation Ireland; David Keeley of Enterprise Ireland; Eric Donald of Teagasc; Gearóid Mooney of Enterprise Ireland; and Ciaran Heavey of the UCD Michael Smurfit School of Business.

The 15 finalists chosen across the five categories then underwent coaching from SNP Communications on pitching their ideas and presentation skills. They then proceeded to the next round of judging where the panel was chaired by Chris Horn of Atlantic Bridge and an Irish Times columnist. It comprised Iseult Ward of Foodcloud; Jackie Glynn of Three; Fiona McElroy of Ulster University; Barry Lunn, former overall Innovation award winner with Arralis; Lana Briggs of KPMG; and Pat Gibbons of UCD Michael Smurfit School of Business.