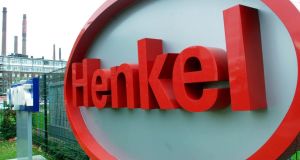 German-listed Henkel is investing up to €18 million expanding its 3D printing research and development (R&D) capabilities as it opens a new hub in Tallaght, Dublin. Photograph: Frank Augstein/AP Photo

Chemical and consumer goods giant Henkel will spend up to €18 million expanding its research and development (R&D) capabilities as it opens a new 3D printing hub in Tallaght, Dublin.

The company which produces brands including Persil, Sellotape, Unibond, Super Glue, RightGuard and Loctite has committed to a four year investment plan aiming to develop new advanced materials for use in a broad range of industrial manufacturing.

Over the next two years the company plans to further expand the centre to 2,000sq m to include an additional five laboratories, work stations and meeting spaces.

The new facility will specifically focus on developing resins used for 3D printing and will also have a sales and support function for clients buying 3D printers on site – including those requiring custom-made parts. Resins for 3D printers were already being produced on site prior to this investment.

“Henkel’s Tallaght site was chosen as the regional hub for Europe due to the existing team’s leading R&D knowledge and experience in resins and other adhesive technologies, and because of the site’s proximity to Henkel Ireland’s production and R&D bases,” said Dr Michael Todd, global head of innovation ad Henkel Adhesive Technologies.

As part of this investment Henkel has agreed partnerships with a number of companies including HP and Carbon 3D while it is also installing specialised equipment and devices for “additive manufacturing” – or 3D printing. It will also sell its own “Locktite” brand of 3D printers.

Both the Government and IDA Ireland praised Henkel’s move with Minister of State at the Department of Housing, Planning and Local Government, Damien English, calling it “a clear endorsement of the innovation ecosystem in Ireland”.

IDA Ireland’s Mary Buckley said the investment “presents a fantastic opportunity for Ireland to enhance our global reputation in R&D and novel technologies”.

Henkel is listed on Germany’s Xetra Dax stock exchange. In 2017, it reported global sales of €20 billion and an adjusted operating profit of €3.5 billion. Founded in 1876, the German-headquartered company employs 50,000 people across more than 120 countries.

The company has three sites in Ireland including its Tallaght facility. In Ballyfermot, Dublin, Henkel has an adhesives manufacturing site while it manufactures a product known as “Dylon Colour Catcher” at Little Island in Cork.