For three innovations it’s all about safety first

Walkers, runners, riders and cyclists need to be seen or heard to be safe 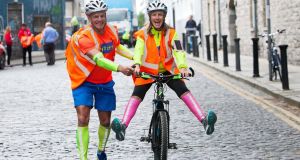 Simon Moore, cyclist and owner of Leglite. “I got hit by three cars in a month. The final straw was I went over the bonnet of a car in front of a national rehabilitation hospital, nearly ended up in it!”

The dark evenings bring with them challenges for those who take to the paths, pavements and roadways of Ireland, whether it be for daily exercise or the daily commute. Walkers, runners, riders and cyclists need to be safe and be seen. Personal safety is paramount. With the help of some great home-grown ideas from personal experience, these three innovations hope to make the world a safer place.

“I got tired of getting run over going to work, and that’s the honest truth. I just decided I wasn’t visible, so I had to start thinking about places where you can put stuff on your person to make yourself more obvious to drivers,” says Simon Moore, cyclist and owner of Leglite. “I got hit by three cars in a month. The final straw was I went over the bonnet of a car in front of a national rehabilitation hospital, nearly ended up in it!”

Leglites are reflective sleeves worn on the lower leg. Available in both a pull-on or zip-on version, there is also an arm sleeve available. Designed with the idea that the motion of the legs will alert drivers be it day or night, the low-beam lights of cars at night pick up the leg movements from 300m away. Moore has not had any altercations with cars since developing his product.

“Mike’s Bikes in Dún Laoghaire was our first customer. When you get something from a concept in your head onto a hook it’s really rewarding, but it takes the time, definitely took about five years,” Moore says.

“Trying to get people to wear them then has been the next step. Some people love them and won’t go anywhere without them, and some people wouldn’t be seen dead in them. There’s a lot of mamils (middle-aged men in lyrca) knocking around that like to dress in black and that doesn’t really help drivers. It’s an obligation on cyclists and road-users to make themselves seen.

“We don’t have a culture like the Dutch do where the cyclist is king. Or the Danish. You wouldn’t get hi-viz on these people if you tried. They barely wear helmets because everybody cycles, and if anyone hits you on a bike with their car there will be serious repercussions.”

Dark country roads can be a dangerous spot for cyclists. With no designated cycle lanes it can pose a challenge not only for the riders but drivers too. Two students from Desmond College in Newcastle West, Co Limerick, have addressed the situation with CycleSafe2000. Breda Magner and Evan Condon have created a product that mimics a cycle lane with the use of lasers.

“We decided that the best way to create something like that would be to get two lasers and put them on the back of the bike – we saw that when the bike was in motion it created a cycle lane.

“We had to make it water resistant and put a battery into it, so we created a cylinder where the battery and all the lights and electronics could go into it,” says Magner. “We had to find things that would be able to attach it on as well, so we found these elastic straps on the internet. We did a lot of trial and error, but eventually we got what we wanted, and we found our finished products.”

Born out of a transition-year enterprise project, the pair are now in talks with an electric bike company which is considering CycleSafe2000 for all its products. They are also now looking further afield than the classroom for their manufacturing needs.

“We wanted to make safety front and centre of our products, regardless of the money we make – we always wanted it to be about safety. We gave it to a few of our friends who are part of a cycling club, they tested it out. When we give out our instructions to our customers we always say to have your feet hip-width apart and then you angle your lights down to your shoes and once you do that you create the line behind you. That line won’t distract any road-users.”

Another product making quite the racket on the personal safety scene is Run Angel. It is a wearable safety device that upon activation not only emits a piercing sound of over 120 decibels but also sends SMS and email notifications with your location to your chosen network of friends and family.

Designed originally with the safety of lone runners in mind, as the company has grown so too has the consumer base. Concerned parents now buy for their kids going on gap years or to music festivals, students buy in the US, and even cyclists in South Africa buy it concerned over their bikes.

“We’ve had cyclists in South Africa buy Run Angel because when they were cycling they were being stopped and their bikes were being robbed from underneath them. They’ve come to us looking for a wearable that’s acceptable when they are riding their bikes. They don’t have to reach for it on a lapel or on their bike. On their wrist they know where it is and they can see it,” says David Caren, who founded the Cork company with his wife Ellen.

Caren, a runner, could see the dangers posed by exercising alone, whether from another party or you becoming injured. He saw there was a need for an effective wearable that could alert people of any distress. Getting the sound right was the challenge in such a small device.

“It’s not like a fitness tracker where you’re dealing with the amount of steps or sleep tracking – that’s not a life or death scenario. Whereas our business is personal safety, it is a life or death scenario, so our wearable has to work when it’s needed. We needed to hire an acoustic engineer, somebody who was very knowledgeable on sound and its output and the tuning of sound frequency.”

Manufacturing in Shannon and now selling outside Ireland in Scandinavia, South Africa and the US, Caren has now set his sights on an all-encompassing product.

“From a firmware long-term perspective we would hope to add various functions to Run Angel which would put it similar to the likes of the Fitbit and Garmin. We originally planned to come out with steps and tracking, but we felt had we done that all the work we put in regarding the acoustic capabilities of the device would be seen as a gimmick, that it would be seen as an add on,” he says.

“We decided to pull the reins back and said let’s come out with a safety wearable, aim it at runners, and get kudos for doing it right and doing it locally. Then when we come out with the device, which will be Run Angle Pro, which will have the fitness tracking cadence and steps, but also have more safety features, people will be able to say this is a brand that got it right the first time.”