Facial-recognition software and our fear of ‘Big Brother’ 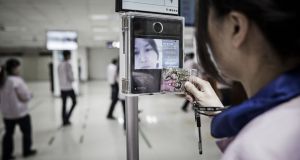 Some employees and passengers at certain international airports accept their faces being photographed for security. Photograph: Qilai Shen/Bloomberg

John de Mol is a Dutch entrepreneur and media tycoon, who has been listed as one of the 500 richest in the world. His influence here in Ireland is chiefly through the reality TV series Big Brother, which he created in 1997. Some 20 years later, there have been several hundred seasons of the Big Brother franchise in over 50 countries worldwide.

The show’s name derives from George Orwell’s book Nineteen Eighty-Four, in which Big Brother is the leader of a totalitarian state wielding absolute power over its citizens, not least by telescreens which continuously observe its inhabitants.

Fortunately, we do not live in a totalitarian society. Nevertheless, the State is increasing its surveillance over us. The Garda Automatic Number Plate Recognition system was first introduced in 2008. Garda cars fitted with the equipment can continuously and automatically scan number plates, and verify that the vehicles so identified are taxed. Speeding vehicles are also identified.

In principle, the system can also verify that vehicles are insured, but full integration with accurate data from insurance companies may yet take until 2019. Paper disks on windscreens for tax, NCT and insurance could then become a thing of the past. As the system has been further developed, it can automatically detect stolen vehicles, and vehicles associated with criminal suspects. During recent court cases, the Garda has reported cars of interest being automatically identified by the system near the scenes of crimes.

In 2015, the Department of Social Welfare introduced facial-recognition software which automatically scans photographs of new applicants against the department’s internal database of existing claimants. Any match is then a potential case of fraudulent identity, and is brought to the attention of the department’s special investigation unit. A number of successful court prosecutions have been taken, and more cases are listed.

Passengers through some international airports accept their faces being photographed during security and then checked again before boarding. International travellers to the US likewise have their faces scanned by customs and border control. The Trump administration has now announced its Biometric Exit programme. Every visa holder leaving a US airport will automatically have a high-quality photograph of their face scanned against the federal visa application database. If there is no match, then the visitor may have entered the US illegally.

Furthermore, the same technology could be used to check the FBI database and other databases of interest at the state or federal level. Thus, in the same way that the Garda system can automatically and continuously check number plates against databases of criminal- and security-related activity, so might many airport systems automatically and continuously review facial scans. In fact, there is little technical challenge to doing likewise using any security-related video feeds, including from good-resolution CCTV systems widely deployed in urban areas. Automatic verification of identity can catalyse continuous law enforcement.

And so, while we have been watching Big Brother, Big Brother is increasingly watching us, with implications for law enforcement and civil rights. But in addition to surveillance by state authorities, the reality TV show is becoming real: not only can we watch and learn about strangers in a custom-built house, but we can potentially watch and learn about strangers in the real world too.

The Google Glass project offered a computer display mounted as a pair of eyeglasses. Google stopped its prototype Glass project in 2014, but not before some software developers had created facial-recognition-based apps for Glass which could identify random strangers.

Just last month, a UK ad agency announced a new app, Facezam, which would let you to take a photo of a random stranger with your smartphone, and then identify them from Facebook accounts.

Facebook’s technology facilitates such automated searches, because the hundreds of millions of its users are explicitly encouraged to identify and tag friends and family members in the photos which are uploaded into Facebook.

Apps which exploit Facebook’s facial-recognition algorithm – such as Facezam violate the social media firm’s current privacy norms and are consequently likely to be disallowed. In fact, Facezam turned out to be a publicity hoax, aiming simply to draw attention to the ad agency concerned.

On the other hand, a Facezam equivalent already exists and is not at all a hoax. The Findface app uses the Russian social network VK to recognise strangers from photos, provided those strangers are users of that particular social network.

Facial-recognition algorithms have reached a level of accuracy whereby identification of strangers is entirely feasible from photos and live video feeds. The only prerequisite is having access to a suitably big data collection of facial photos.

John de Mol has made a lot of money from his Big Brother reality TV brainchild, but it is not his only reality TV concept. Among other titles, he created Fear Factor in which contestants are challenged to overcome their instinctive fears. Our own fascination with identifying and watching complete strangers is becoming scary.