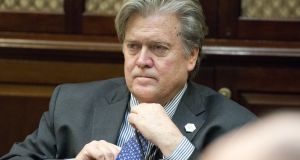 “The abuse of greatness is, when it disjoins remorse from power.” So mused Shakespeare’s Brutus, contemplating his response to the increasingly tyrannical behaviour of Julius Caesar. Caesar introduced term limits for important governing positions while making his own appointment indefinite; installed his own men to control the senate; appointed his own pool of magistrates; reduced social support funding; and outlawed professional guilds.

Many Americans, including in Silicon Valley, are struggling to come to terms with the new Trump regime. An ill-planned attempt revoked rights for green card holders and for bona fide students, suspended a special immigrant visa programme, and refused to accept accredited refugees, all across seven countries in the Middle East. If President Donald Trump succeeds, many in Silicon Valley and elsewhere are wondering whether the American values of cordiality and graciousness will become lost.

There are strong rumours of the curtailment or even complete cancellation of the immigrant work visa programme, under which 65,000 professional immigrants are permitted into the economy per year. Trump’s current executive order on immigration also calls for a “uniform screening standard and procedure” for all wishing to enter the US. At face value, this would imply that the current ESTA programme, which operates a visa waiver system, might be disbanded and replaced by an examination process common for all travellers, regardless of country of origin and residence. These steps would greatly hinder business as well as destroy inbound tourism to the US.

Trump, meanwhile, committed to the creation of 25 million new jobs within a decade. This implies an average of more than 200,000 new jobs every month, especially in those mid-western states such as Wisconsin, Pennsylvania and Michigan which delivered his victory. If the immigrant labour pool is lost to Silicon Valley as a result of new visa restrictions, can Silicon Valley source replacement labour from within America, and in particular from the rust-belt? Can Silicon Valley innovate to effectively retrain and re-skill unemployed citizens across the US? Will we see an explosion of electronics, materials science and software educational programmes across the mid-west?

Trump has blamed the jobs losses in the rust-belt and across America, on lower cost economies in Mexico, South-East Asia and China. While these are factors, the larger reason is the consequence of higher productivity from automation. Silicon Valley’s computers and software have displaced jobs in manufacturing, agriculture, advertising and the media, logistics and many other sectors. So far Trump has chosen not to denounce the high-tech industry as a root cause of blue collar job losses. But Silicon Valley is vulnerable to such allegations. Some ponder whether the high-tech industry should take initiatives to help re-skill America and so curry favour with Trump and his electorate.

In general Silicon Valley’s economy has been largely independent of government contracts and largesse, albeit that many of the core innovations emerged as a direct consequence of military, nuclear energy and space research programmes. It is early in the Trump administration, but it is unlikely that the government will become a major direct customer in Silicon Valley. However, Trump is pushing the American public towards the news flow and commentaries from Fox and Breitbart News. Certain corporate behaviours may come to be interpreted as patriotic, while other entirely legitimate actions may be labelled as “un-American”. There could be a drift towards companies seen to actively support the Trump agenda. A favourable relationship with the regime may become much more pragmatic than the mere rules and the law of the past. The new American society may become isolationist and singularly focussed, far from the old constitutional norms of freedom and integrity.

With America first, trade restrictions and sanctions against other countries are imminent. Silicon Valley is deeply concerned that trade sanctions will devastate the supply chains for components, subsystems and completed products for the computing industry, including for mobile devices. It is uncertain whether alternative sources can be created within the US to replace the lost suppliers overseas. End products will become very much more expensive for the consumer and industry.

Trump’s strategist Steve Bannon has asserted an inevitable war with China within a few years. China has made a foray into the South China Sea for extra marine territory and can now defend it with military installations on formerly uninhabited reefs and sandbars. China has become the largest importer of oil from the Middle East, and as a result is vulnerable to political and military turmoil in the region or on its shipping routes. Alternative sources of oil and gas much nearer to the Chinese mainland would remove a strategic national risk.

Trump nevertheless should tread warily with China. China holds very substantial reserves of the dollar due to the trade imbalances with the US. It could, if it chose to do so, cause havoc on global exchange markets. Silicon Valley and the entire American military-industrial complex are also acutely aware that China holds a near global monopoly on certain “rare earth” minerals which are critical to the semiconductor and electronics sectors. If China were to stop supplying these minerals, most high-tech and advanced military equipment simply could not be made.

Silicon Valley indeed has much to contemplate.