Angry and exhausted: In the firing line of Trump’s tech wars

The US president has the big tech players in his sights – will they ignore him or fight back? 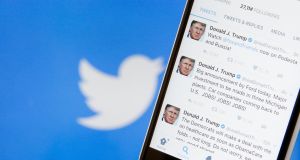 My current emotional state is pinned to the top of my Twitter feed. It reads: “Being angry all the time is exhausting and corrosive. Not being angry feels morally irresponsible.”

This tragically accurate 97 characters was penned by American author and film critic Tim Grierson. His succinct depiction may refer to the broader malaise sweeping the United States at present, but it fits the prominent sentiment in tech, specifically, too.

According to a Gallup poll, 26 per cent of Americans have a Twitter account, 8 per cent of whom personally follow Trump’s official Twitter account (@realDonaldTrump). The same poll indicates Democrats pay far more attention to Trump’s tweets than Republicans. But the percentage on the Left who follow him directly is significantly lower than those who support him, the implication being they learn about his tweets indirectly, through the broader news media.

In other words, Trump’s tweets reach Americans not directly through Twitter but often through so-called “fake news” outlets because editors in news and social media propagate, rebroadcast and incorporate them into their schedule of what they deem newsworthy on any given day. It doesn’t take a genius to see the paradox here.

Angry but exhausted yet? I’m only getting started.

While, publicly, news from the tech industry since Trump took office has been mostly negative, many of the major players continue to go about their business successfully. Apple and Amazon reached record market capitalisation of $1 trillion in the last month alone.

Elsewhere, companies espousing more ethical business practices than most, most notably Google, are adopting the kind of amoral business tactics the Potus has been known for in the past. The world’s largest search engine’s decision to re-enter the Chinese market wasn’t unexpected, given the potential of the Chinese market. Still, it’s disappointing.

The great (US) firewall

This news comes in tandem with the Trump administration’s plan to impose a 10 per cent import tariff on more than $500 billion of products and services made in China, an economic sanction which would hit tech hardware companies particularly badly, given how much of its manufacturing needs are met in Asia.

But not all companies will be directly affected by this seemingly disastrous trade decision.

American companies, dependent on the cheap labour costs that make China so attractive, will suffer. But the trillion dollar-valued Apple, which, for obvious reasons, is better equipped to deal with economic sanctions than most, will not be one of them. That’s thanks, in part, to CEO Tim Cook’s cosy relationship with the commander-in-chief.

Cook has been loitering outside the White House for months in an effort to get as much “me time” as he can with Trump. He is on better terms with the US president than most CEOs in tech, a relationship Cook has fostered in an effort to convince the president to leave Apple alone.

His strategy has paid off. The US trade department included Apple watches and AirPods on a list of 300 products exempt from the tariffs. Chinese economic retaliation may still hurt Apple, like everyone else. But their pain will be more manageable.

The US administration has been making many empty threats at tech companies, in particular social media, citing various anti-competitive practices as well as the deliciously ironic accusation of bias. Nothing had really come of it until now.

The White House has just drafted a memo awaiting president Trump’s signature instructing state authorities to “thoroughly investigate” potential violations of US antitrust laws by Google and Facebook. The real reason for this formal call to arms is that these and other social media platforms – including Trump’s beloved Twitter – have been deemed politically biased in favour of Democrats and more liberal-leaning agendas generally.

Of course, this executive decision flies in the face of earlier accusations by Congress that Facebook played far too active a role in shaping Trump’s online campaign strategy during the last US election.

Facebook was scrutinised after revelations that some of its employees were too heavily entrenched in the Republican’s election campaign strategy. Given its wide reach and influence worldwide, some believe Facebook was crucial in guaranteeing the defeat of Hillary Clinton, who did not enjoy the same level of “hands-on” assistance from Zuckerberg’s brightest and best.

As one Amazon dwindles in size and stature from deforestation, another continues to grow in size and stature. Amazon’s trillion-dollar market value may have been only for a brief moment, but it demonstrates the growing dominance it has in online consumer sales.

This is a pro-business government. So one might assume Trump is a fan. But the man tends to bear grudges, of which he holds many for Amazon CEO Jeff Bezos. Earlier this year, the president accused the online market place – where, by the way, you can find 18 pages of Trump-related swag for sale, including everything from Donald Trump commemorative coins and coffee mugs that say things like “The best part of waking up is remembering Donald Trump is my president” and shirts branded “Some pigs grunt, other pigs tweet” – of tax avoidance, destroying the US postal service by undercutting its shipping rates and driving smaller companies out of business.

Bezos also happens to own one of the biggest peddlers of “fake” (that’s real) news in America: the Washington Post, a newspaper with an excellent track record for investigating and exposing dirty political practices.

In June 2017, Donald Trump tweeted: “The FAKE MSM [mainstream media] is working so hard trying to get me not to use Social Media. They hate that I can get the honest and unfiltered message out.” The Washington Post was one of several “credible” news outlets to report this.

These kinds of messages reach so many more people because the MSM Trump loves to hate, or hates to love, give him so much exposure.

After being verbally abused by some bigger boys when I was eight years old, I ran home to my mom, who to told me not to retaliate when older boys called me names.

“Just ignore them,” she said. “It’ll aggravate them so much more than fighting back.” I understood the logic of this as a child. But I still went to bed early – exhausted and teary-eyed from the day’s events. Three decades later and I frequently find myself wanting the same thing: to crawl into my bed and stay there until my anger is overcome by exhaustion.