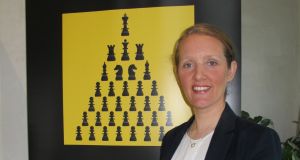 SAR co-founder Sheelagh Brady: “We are taking technologies that already exist but bringing them together differently to create a robust, focused and more effective communications system.”

People are constantly on the move travelling for business and pleasure. Most of the time all goes well but if there’s a problem and it escalates, then those working alone or in remote or hostile areas are especially vulnerable.

Sheelagh Brady is a security analyst and the co-founder of SAR (security analysis and research), a security travel platform aimed at companies and independent business travellers. She set up the business as a consultancy with John Roberts in 2015 and their first product, S-MAN (short for security management), will be launched early in 2019.

Brady says S-MAN will enable companies to comply with their duty of care obligations and will be a go-to resource if incidents occur. “We’re talking about storms, travel disruptions, fires, mass casualties and up to and including kidnapping and terrorist incidents,” she says.

“There are safety products on the market but they are often off the shelf and not intuitive for the user. We intend to embed the use of our system within the business culture of an organisation as we know it can be difficult to get employees to buy into their use.”

Brady and Roberts got the idea for S-MAN (which will be an app with a desktop version) while working in Libya. The situation there deteriorated and they had to be evacuated to safety in Tunisia.

“Based on our own experience we felt that security risk and travel management could be done differently and our collective experience in conflict and post-conflict countries like Iraq, Afghanistan, Bosnia and Herzegovina, and Libya provided us with valuable knowledge of security needs in high-risk environments,” says Brady who recently participated in the Female High Flyers accelerator at DCU.

“Terrorist incidents in Paris, Brussels and London, consolidated this need while in the aftermath of Storm Ophelia many businesses realised they had no single point of contact with employees,” she adds.

“They wanted something that would work for people as they travelled but also for critical incidents. We are not creating new technology per se. We are taking technologies that already exist but bringing them together differently to create a robust, focused and more effective communications system.”

Brady spent 14 years with An Garda Síochána before moving into international security. She has a master’s degree in crime science, an MA in criminal justice and is currently studying for a PhD in law at DCU. She has worked as a mission security analyst with the European Union Border Assistance Mission in Libya, as a senior security information analyst in Nigeria and as an analyst with the European Union Police Mission in Bosnia and Herzegovina.

Roberts also comes from a background in international conflict zones having worked with the United Nations and NATO and spent time in the Western Balkans, Congo, South Africa, Pakistan, Afghanistan and Libya.

“John has managed evaluation committees on high-value security contracts in an international environment so he is very aware of clients’ needs,” says Brady. “He is also a keen techie – he’s qualified in electronic engineering – so he could see possible solutions to the problem using technology while also being mindful of the obstacles and limitations that exist.”

The company will begin testing its MVP at the end of this year with a view to a soft launch in mid-2019. The company’s revenue model is SaaS based on the number of users and S-MAN’s potential buyers are businesses, international NGOs and governments. The project has been supported by LEO Kildare with a feasibility study grant and so far the promoters have spent about €35,000 developing their idea.

The next stage is to get their MVP finished and to raise about €150,000 to fund its ongoing development and rollout. “We’re building the product a bit like Lego,” Brady says. “We are starting with a basic product but there are a number of different elements and features we will add on as we go.”