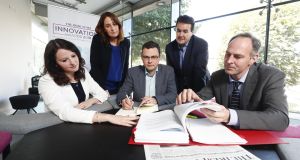 Judges for the first round of this year’s Irish Times Innovation awards: Lana Briggs of KPMG; Lisa Higgins of Science Foundation Ireland; David Keeley of Enterprise Ireland; Michael McAleer of The Irish Times; and Eric Donald of Teagasc. They were joined in the judging by (not in photo) Gearóid Mooney of Enterprise Ireland and Ciaran Heavey of UCD.

After sorting through this year’s applications, 85 entrants qualified to enter this year’s awards judging process, across five categories. The innovations were then scored across a range of criteria, including proven originality, market/user impact, project management and the potential for sustainability.

In a particularly strong category this year, the three finalists chosen come from a mix of equine, aid and financial technology.

Equine Medirecord, based in Co Kildare, has developed a series of IT platforms that allow the easy recording of medicines administered to racehorses and other bloodstock. This record-keeping is mandated under regulations and the company’s easy-to-use platform has been approved by the regulator, offering an alternative to the cumbersome paper trail that existed to date.

Aid:Tech is an Irish tech company using blockchain to distribute international aid in refugee camps. Its platform enables entitlements such as aid, welfare, remittances, donations and healthcare to be digitised and delivered through blockchain technology in a completely transparent manner. Once an end user gets their Aid:Tech digital identity, they can receive entitlements such as social security, healthcare allowances and other services including remittance. A previous finalist, it was the first company in the world to deliver international aid using blockchain technology to Syrian refugees in northern Lebanon, in partnership with the Irish Red Cross.

Galway-based fintech company Priviti helps companies systemise and manage granular consent for data sharing, especially for financial institutions, so they can collaborate with partners. Particularly important in the age of GDPR regulations, the innovation provides full audit trails for compliance and analytics, but also facilitates consent between three parties on a transaction-by-transaction basis.

Given the importance of the pharma sector to the Irish economy, this year’s finalists reflect not only innovations in the management of drug testing and supply in the European Union, but also in tackling global viruses and in the world of medtech.

Aalto Bio Reagents is an Irish company playing a global role in tackling serious tropical viruses such as zika, dengue and yellow fever. It has become a major innovator, despite competition from various pharma giants, introducing diagnostic kits to market and becoming a one-stop shop for many of its clients. The company is already a leading provider of proteins, antigens, HIV antibodies and disease state human plasma to the in-vitro diagnostic industry.

BrainwaveBank, based in Belfast, has built what it describes as “a Fitbit for the brain”. The tech will allow real-time analytics to be conducted on brainwave activity and to accelerate analysis of aggregated data. The company’s technology enables users to track their cognitive health on a daily basis, using a wearable device and a smartphone app. It then uses advanced analytics and machine-learning tools to detect possible signs of cognitive decline and empower people to make simple lifestyle changes to encourage healthy aging of the brain.

MIAS Pharma acts as a catalyst to make Europe an accessible market for new medicines in the most time-efficient/cost-effective manner. Ultimately it aims to accelerate the availability of medicines to patients within the EU. It works as a supply-chain oversight partner for international pharma/biopharma companies seeking to release products into Europe. The company holds manufacturing, importation and authorisation licences for investigational medicinal products for use in clinical trials and also for commercial products. Therefore it offers a soft, minimal-risk entry for client companies into the EU/EEA market.

Often the best innovations are the result of applying ingenuity to problem-solving. This year’s finalists include a company that has solved the conundrum holding back the development of 3D printing with metallic powder additives, improvements in the world of drug production and a smart environmentally-efficient application in a growing sector of the service industry.

Co Limerick-based company AddiHive has created PowderLoop, an innovative system for the use of metallic powder additive in manufacturing processes. While metal 3D printing is growing in popularity, several hurdles needed to be overcome to realise its full potential. AddiHive’s new system promises to greatly accelerate the adoption of metal 3D printing and quality, along with safety. The innovation came out of necessity, as the company scanned the global market for a solution and eventually came up with the answer in-house.

A previous finalist for an earlier innovation, Innopharma has now created a system which through the use of smart sensors, data feeds and real-time data visualisations can track and control the coating process for solid dosage pharmaceuticals, to ensure the very specific coating of a drug release profile for a given batch of capsules or tablets is achieved. It allows pharma companies to manufacture a batch of tablets/capsules within specified coating thickness in the shortest possible time and with a full track record of the operation.

Marco Beverage Systems has designed and built an award-winning water boiler for coffee shops, restaurants and the like, which delivers three high-accuracy water temperatures and three volumes from a tank. Called the MIX, it is said to be 70 per cent more energy efficient than leading rivals and has already generated substantial sales for the Dublin company.

This new category is something of a catch-all, and it proved particularly popular among entrants. After much debate and consideration, the final three for this year include an animation studio marrying its creativity with practical industrial applications, an online auction house that is improving the transparency and speed of the often antiquated property sales process, and an ingenious medtech development that has already caught the eye of the likes of Richard Branson.

3Ms Imagineering is an Irish animation studio that specialises in creating immersive virtual reality environments for business. The Athlone company has taken the growth in virtual reality developments and applied it to the world of advanced manufacturing to create virtual models that mirror the real world in order to allow for various scenarios to be played out. It means, for example, that they can provide training and the interpretation of data in a visual way for customers.

BidX1 is an online auction that allows users to buy or sell property online from anywhere in the world. Since 2011 BidX1 has sold more than 8,000 assets, with bidders from 24 countries using the platform. One feature of the system is that legal documents are uploaded by the vendor’s solicitors so potential buyers can perform the necessary due diligence before bidding.

Coroflo is an Irish medtech company that has developed what it claims is the world’s first accurate breastfeeding monitor. A spin-out from the DIT Hothouse programme, it has developed a revolutionary nipple shield and app that helps mothers monitor the milk flow to their baby in real time. The silicon shield comes with a patented micro-flow sensor embedded which provides accurate details of how much breast milk an infant has consumed.

It’s appropriate that the three finalists in this category are attempting to tackle three of the biggest social and environmental challenges facing the island at present: energy, housing and transport.

With an international focus on energy usage and the need to meet EU targets to have 16 per cent of the country’s total energy consumption originating from renewable energy sources by 2020, EirGrid, the State-owned electric power transmission operator, has created an innovative and efficient trial process for renewable-energy suppliers to quickly integrate with the grid. The system has already achieved praise for setting global benchmarks from the initial trials process, balancing the need to bring renewables on to the grid while retaining a focus on the safety and security of the grid.

In an effort to tackle the ongoing housing crisis Ó Cualann Cohousing Alliance has come up with an innovative model to create affordable housing in sustainable communities. Already the housing co-operative has built and sold 49 homes in Ballymun, Dublin, at prices starting from €140,000. Buyers had to satisfy income limits and other criteria and were also subject to a clawback if they sold. Further developments are in train. The Ó Cualann scheme has been used as a model for a new national affordable housing scheme.

With parking at a premium in increasingly crowded urban areas, Parkpnp describes itself as the Airbnb of parking solutions. It offers an online marketplace for parking places, from commercial and residential customers, including hotels or office blocks where bookings can be sold on an hourly or even a monthly basis.

After completing due diligence on the finalists, the chosen 15 will go forward to present before a final judging panel in October, with the winners announced at a ceremony at the RDS, Dublin, on November 20th. We will be profiling all 15 finalists in detail over the coming weeks.