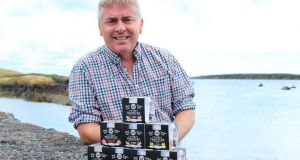 Schull & Crossbones founder Danny O’Regan: “Initially, the focus will be on the Irish market and if it’s a success here, we will look at export opportunities in year three.”

West Cork start-up, Schull & Crossbones, produces a range of yoghurts made from coconut milk. The products, which sell under the Coconut Treasure label, have been on sale since July primarily in SuperValu outlets in Cork with wider distribution about to get under way.

The interesting twist to this story is that company founder, Danny O’Regan, is actually a dairy scientist who spent most of his career working with companies that make the starter bacteria used to produce cheese and yoghurt. He subsequently ran his own starter bacteria distribution business in Melbourne before returning to Schull in 2015.

“The idea for the business was borne out of necessity and backed by experience,” O’Regan says. “Both my parents were not in the best of health in 2014 and at the peak of my mother’s illness, I was a useless eldest son in Melbourne so I decided to move back to Schull. There’s no work for someone with my background in Schull so I knew I’d have to set something up myself.

“Initially, I looked at using my brother’s goat herd as a milk source for yoghurt but the volume was not there to make it a sustainable business. I’d helped a client in Australia to formulate a coconut milk yoghurt and it worked very well so I decided to see if there was an opportunity for that kind of product in Ireland.

“The ‘free-from’ market here was worth €40 million last year and is estimated to be worth €50 million by 2021 and we’re well placed to benefit from this growth.”

O’Regan says he’s tapping into the burgeoning demand for dairy-free and vegan foods but also introducing Irish consumers to a versatile new product. “My aim is to shake up the traditional refrigerated dairy section in the supermarket,” he says.

“Coconut Treasure will appeal to those with dairy or lactose intolerance and to vegans but also to the mainstream market as it’s a rich, creamy dessert/yoghurt. There are other dairy-free yoghurts on the market but Coconut Treasure is the first and only Irish-made one.

“Initially, the focus will be on the Irish market and if it’s a success here, we will look at export opportunities in year three,” says O’Regan who spent 26 years working abroad in England, Denmark, Australia, Germany and France initially as a cheese technologist before moving on to the commercial side of the industry. Prior to setting up his own business in Australia he was global business director for Danish food ingredients company Danisco.

At the moment Schull & Crossbones is a one-man operation and O’Regan makes, packs and does some of the distribution himself. However, all going well he expects to have three full-time employees on board by the end of 2019. Start-up costs to date have been in the order of €50,000 between personal investment and borrowings and the venture has also been supported by Clonakilty LEO.

Coconut Treasure comes in four flavours – natural and three fruit varieties. (The fruit compotes used are also hand-made in west Cork by artisan producer Clotilde). It has no added sugar and is made with just three ingredients: coconut milk, tapioca starch and the starter culture. O’Regan says this simplicity produces a product that is superior in taste and mouth feel to competing coconut yoghurts.

O’Regan uses Indonesian coconut milk for his yoghurt as he says its quality and lighter flavour suit his needs best. It’s a pricey raw material at €3.30 a litre but he says knowledgeable consumers understand why his product costs more than cow’s milk yoghurt and are willing to pay the difference.

His product retails at €1.95 for a 90g pot. He has looked at the possibility of growing coconuts in west Cork and technically he says that it can be done. However, that day is a long way off.