FoodMarble: The air that we breathe out 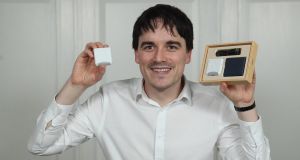 Aonghus Shortt, co-founder and chief executive of Food Marble: “We launched the device in December 2018 and caught the tail end of the Christmas market; 2019 has been very good and we are on target for sales of €1 million for our first full year”

FoodMarble has developed what can best be described as a breathalyser to assess an individual’s digestive health. The Aire – pronounced air – is a connected breath analysis device and app which measures the hydrogen content of the user’s breath to help find the foods most compatible with their specific digestive system.

The name comes from a combination of words, according to co-founder and chief technology officer Peter Harte. “We breath air, aire is the Irish for care and it is also the Japanese word for gut,” he says.

The innovation has its origins back in the founders’ days as postgraduate students in UCD. “One of the founders’ partners suffered from irritable bowel syndrome,” Harte explains. “Being typical scientists we wanted to solve the problem rather than just sympathise. We looked at dietary information and food science and used our engineering and scientific backgrounds to create a hydrogen testing device. The early prototypes were made with components we got off the internet.”

The problem being addressed by the Aire is widespread. “One in eight people worldwide struggle with digestive problems,” says Harte. “It is not going to kill them, but it has a hugely negative impact on their quality of life. A lot of the therapies in use are not all that effective and there is a lot of evidence to show that dietary interventions are not working either.”

The problem is that everyone’s digestive problems tend to be unique to them.

At its simplest, the Aire device is a hydrogen breath tester but its use goes a lot further than that. “It measures hydrogen levels in the breath,” he adds. “This gives an indication of fermentation in the gut. If you struggle with digestion, it’s often due to fermentation in the gut. But foods that ferment for me might not ferment for someone else. Hydrogen breath testing gives objective data to help with digestive analysis. This was already an established science, but big, expensive machines were required to measure it up until now.”

The company began with the founders either working part-time in it or finding time to devote to it outside of their PhD studies. “In 2016 we applied for Seán O’Sullivan’s HAX Accelerator in China and were accepted on to the programme,” he says. “That come with $100,000 (€90,700) in investment. We went out to China and learned about design, prototyping, manufacturing, marketing and so on. That really helped us bring the company forward.”

The company then found a novel way to fund early-stage growth. “The nature of hardware is that there are a lot of up-front costs to be met in terms of design and initial manufacturing,” Harte says. “We made the device available on a pre-order basis at a reduced price. People were able to order the device and pay for it in advance knowing they wouldn’t get it for a while.

“By late 2018 we had received $1 million in revenue from people pre-ordering the product who were willing to wait for it to be delivered. That was an indication of just how big the problem it is that we are addressing. That gave us the revenue to further develop the product. In August 2017, we followed that up with a €1.7 million funding round from Breed Reply in London and SOSV and a few others.”

That funding supported ongoing growth. “We used it to build out the team and we now have 16 employees and are selling into over 50 countries around the world.”

“We eventually shipped all the pre-orders by the second quarter of 2018,” he adds. “We launched the device in December 2018 and caught the tail end of the Christmas market; 2019 has been very good and we are on target for sales of €1 million for our first full year. We are also busy refining the product and have already begun working on products two and three. We are hoping to test for further chemicals involved in digestive health. We sell to everywhere in the EU as well as the US, Australia and New Zealand. Our main focus has been English-speaking markets and we are just in process of running a series A funding round.”

With a total addressable market estimated to be worth $12.9 billion, $2 billion in the US alone, the future looks bright for FoodMarble and the Aire device.