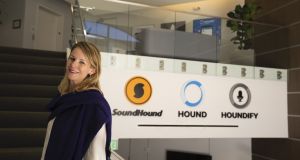 Ireland is home to some of the leading players in the voice tech space, one of the industry’s best known representatives has said.

Speaking to The Irish Times ahead of a visit here for the ConverCon conference in Dublin next week, Katie McMahon, general manager and vice president of SoundHound, said she had been seriously impressed by the level of talent in the country.

Soapbox is an Irish company that uses artificial intelligence and deep learning to develop cloud-based speech recognition solutions specifically for young children, while Voysis is a start-up that has developed a voice recognition platform driven by natural language instructions and search capabilities for third-party enterprises.

SoundHound may be best known as a rival platform to music recognition app Shazam, but in recent years the company has become a recognised leader in voice through its Houndify platform. The company’s technology has been adopted by a number of well-known brands, proving particularly popular with car manufacturers such as Mercedes-Benz, Peugeot, Hyundai, Kia and Opel.

According to Ms McMahon, the benefit of Houndify is that it provides companies with a ready-made voice solution, making it easy to roll it out to just about any device.

“Powered by Houndify offers all the tools for any partner in any vertical to add voice to their product or service, be that a car, a piece of hardware, or a mobile app for example, without having to spend years discovering and building their own platform.

Ms McMahon said what differentiates SoundHound’s technology from that of rivals is that it is more context-aware.

“Rather than just asking what Italian restaurants are open nearby, you can also find out which ones of those have outdoor seating,” she said by way of example.

“These tools are accessible to brands without them having to feel tied to one of the major internet companies’ platforms,” Ms McMahon added.

While music recognition may have made SoundHound’s name, Ms McMahon said the company founders actually started off focusing on voice initially when they founded the company in 2005 but were way ahead of their time.

SoundHound last year announced a $100 million fundraise with backers including Tencent, Hyundai, Orange and Daimler as it looks to ensure its technology becomes the option of choice ahead of the likes of Amazon’s Alexa, Google Assistant and Microsoft’s Cortana.

“The reason SoundHound is a very formidable player in this space is because we are bringing our tools to partners and letting them carry it forward,” said Ms McMahon.

ConverCon, the world’s first conference dedicated to the opportunities and challenges arising from the move to conversational interfaces, takes place in Dublin on Thursday, October 17th. Other speakers include Voicebot.ai founder and chief executive Bret Kinsella.