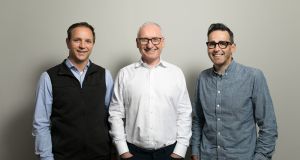 Having achieved the kind of success that most entrepreneurs can only dream of, you’d forgive Annrai O’Toole for wanting to take it easy. But that is the last thing on his mind.

After co-founding two hugely successful companies in Iona Technologies and Cape Clear Software, O’Toole went on to lead the Irish operation of Workday for a decade. But now, instead of putting his feet up, the tech veteran is gearing up for success again with Utmost, a new start-up he believes could be as big as his previous companies.

Utmost is behind a new software solution known as Utmost Extended Workforce. This product helps manage individuals who work for but are not directly employed by companies. This includes contractors, freelancers, temps, vendors and consultants.

“There is a big need here that isn’t being met. The way that large organisations interact with their extended workforce isn’t working, either for them or their workers. More people want to be independent workers and they need to be looked after better,” says O’Toole.

“We’re interested in doing something at scale. We think there is a significant opportunity for us and that’s what we intend to chase. It is both exciting and daunting,” he adds.

The start-up has just raised $11.2 million (€10.2 million) in a funding round led by Greylock Partners, which has previously backed the likes of Airbnb, Coinbase, Gofundme, Next Door, Medium and O’Toole’s previous company Cape Clear Software. Workday Ventures, the $250 million investment arm of the entrepreneur’s former employer, also participated in the Series A round.

While admitting he did consider taking a back seat after leaving Workday last year, it didn’t take O’Toole long to realise he’d be happier back in the hot seat again.

“I left Workday having done 10 years there and I did initially think about becoming an angel investor, or simply just staying at home and pruning the roses. But the more I looked back on my career the more it occurred to me that the thing I’d done reasonably well was starting companies. I also really enjoy doing it,” he says.

To say he’s done “reasonably well” with companies is something of an understatement. Along with Iona co-founder Chris Horn, O’Toole is arguably one of the founding fathers of the Irish tech scene.

Iona, a Trinity College Dublin spinout that was founded in 1991, was one of Ireland’s earliest and most successful technology companies, floating on the Nasdaq stock exchange in 1997 and at one stage valued at $1.75 billion. Cape Clear meanwhile, which O’Toole co-founded in 1999, was a web services company that also achieved significant success before being acquired by HR software giant Workday for an undisclosed sum in 2008.

In typical fashion, O’Toole isn’t content to just achieve a modicum of success with Utmost – he’s going all out.

“If you start with a good strong team and a great idea that you execute well, you can change the world and that’s what we’re interested in doing,” the entrepreneur says.

Utmost certainly has the credentials to succeed. Along with O’Toole, the company’s other co-founders are former Workday executive Dan Beck and Paddy Benson, previously chief technology officer at Groupon.

“We spend time deciding on what we could focus on. We broadly knew we wanted to build an enterprise solution and that it would be something complementary to Workday. We also wanted to do something that would play to a big audience,” says O’Toole.

With Utmost, enterprises gain full visibility into their extended workforce, something that to date few have had. But while the solution certainly aids companies, it is also designed with the workers themselves in mind, enabling them to have control of their data and work history, independent of traditional employment relationships.

Utmost is tapping into a big market. Almost 80 per cent of chief human resource officers see a greater use of non-traditional employees as a solution to future worker and skill shortages, according to the C-Suite Challenge 2018 Survey from the Conference Board. In addition, Staffing Industry Analysts’ estimates total global spend for the non-traditional workforce reached $4.5 trillion in 2018.

“We think we’re doing something novel in this space and it is something that is reflective of the long-term trend in general, with one forecast I saw suggesting that, by the middle of the next decade there will be more people in the US that are independent workers than there will be in full-time employment,” says O’Toole.

Despite this growing demand, Deloitte’s 2019 Human Capital Trends report estimated that less than one in 12 enterprises have established processes to manage this growing population.

“Coming from a Workday perspective, which very much has its roots in the world of HR, I was really surprised at how procurement-centric existing solutions are in this space. For large organisations with 1000s of workers, hiring in often an exercise in procurement with a focus on contracts, rate cards and so on,” says O’Toole.

He notes the existence of solutions such as SAP Fieldglass and Beeline as examples of software that is used in this space, but which he says is procurement-centric.

O’Toole says that Utmost will give companies the bigger picture in terms of extended workers with its solution also helping with issues such as on-boarding and off-boarding people.

He won’t be drawn on whether the company intends to roll out a whole suite of products but hints at it.

Utmost already employs 25 people in Dublin and San Francisco with most of the staff having been recruited from friends and acquaintances. In addition to announcing its fundraise earlier this month, the start-up also revealed its first customer. US insurer Colonial Life, which provides services for more than 3.7 million people in more than 90,000 companies and organisations, has just selected Utmost’s solution to support its 14,000 independent insurance agents.

“We’ve assembled an extremely talented team mainly consisting of people we’ve worked with before. It’s been great to reach out to former colleagues who said to us that if we were ever doing something new to give them a call,” Paddy Benson says.

Both he and O’Toole laugh when they get to talking about the differences in setting up a company now compared to back in the day.

“Both myself and Annrai have gone from the days of producing software on printed CDs, putting them in boxes and Fedexing them to now just pushing it all out to the cloud. That obviously gives for greater agility, allowing you to be productive and build a footprint very quickly,” says Benson.

“The cloud also means that instead of having to deal with multiple racks and endless cabling, our physical infrastructure spend was focused on routers and coffee machines,” he adds.

As O’Toole notes, the Dublin tech scene is also vastly different to when he started in business.

“Back in 1991, when we were setting up Iona, there was little to no software being done in Dublin. There was us, Kindle Banking Systems and maybe a few others, but now there are plenty of companies doing development work here,” he says.

For a company that, according to O’Toole has “no hard limits in terms of hiring numbers”, this is obviously good news.

“We are in the lucky position of being well funded and obviously the first part of the journey is assembling the team and getting a basic version out to market. The second phase, which we’re now in, is about getting customers. Ultimately, you only exist if what you have is something that customers see as valuable,” he says.

“I think that someone is going to do something big in this space, so why not us?” O’Toole adds.