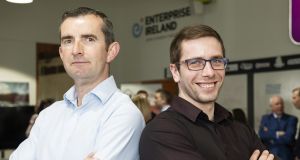 Patrick McDermott and Artur Leonowicz. “The real beauty of the system is the single dashboard that allows a manager to see exactly what’s going on with stock at a glance,” McDermott says. Photograph: Andrew Downes

Patrick McDermott cut his teeth in the hospitality sector as a sommelier and restaurant manager on Cunard line’s QE2 and QM2 cruise ships. While doing these jobs he got up close and personal with the shortcomings of badly executed stock counts and dealing with the fallout when information was incorrectly transferred to spreadsheets.

This experience inspired McDermott’s first business, Stocktaking.ie, which he set up in 2004 to provide an outsourced stocktaking service to the retail and hospitality sectors. In 2016, he saw the opportunity to set up a second business that would harness technology to propel the still heavily pen and paper dependent food service sector into the world of digital stock keeping. DigiTally began trading last year and its focus is on the management of perishable produce in multisite food and hospitality businesses.

“DigiTally is a reporting dashboard that digitises inefficient manual stocktaking processes and enables businesses to count, collate and compare their inventory information on a league table that is over 70 per cent faster to generate than pen and paper. It is also simple to use making it suitable for all staff regardless of technical ability,” says McDermott who completed a BComm in UCG in 2016 and is now developing DigiTally with his co-founder, Artur Leonowicz, at the NDRC-run accelerator at Galway’s PorterShed innovation hub.

“The real beauty of the system is the single dashboard that allows a manager to see exactly what’s going on with stock at a glance,” McDermott adds. “Pulling the information together in one place means greatly improved decision-making while our system also enables management to accurately identify their highest and lowest performing sites, what issues are occurring and where, what sites are overstocked, which sites can others learn best practice from and which ones require additional support and monitoring.”

One of the reasons McDermott decided to set up a second business was because his first was difficult to scale as it involved boots on the ground. DigiTally, however, is cloud based so it can travel. The company already has already had interest in the system from the UK and Australia.

“Stocktaking.ie has been trading away quietly in the background and it provided the security that allowed us to start thinking about and then begin building DigiTally over the last number of years,” McDermott says. “Artur and I have worked together for eight years and he combines the best of technical knowledge with a deep understanding of inventory control. From experience, we know people don’t like the tedium of counting things and writing them down. But nowadays they are familiar with and happy to use apps.

“Essentially our aim was to create an intuitive system that took the pain out of the counting process. With DigiTally, multiple people can count at the same time using a mobile phone or tablet and there is only one obvious place to enter a count which greatly cuts the potential for errors. Existing stocktaking apps tend to focus on items with barcodes, which fresh products don’t always have, while point of sale recording systems are complex to learn and require significant amounts of training. That’s not helpful in a sector with high staff turnover and both solutions lack the cohesiveness to bring key data together.”

The company’s sweet spot are businesses with 100 sites or more and it has already signed its first customers. McDermott says that after six months they had increased their gross margins by just over 4 per cent per site using the DigiTally system. In value terms 4 per cent is worth roughly €30,000. DigiTally will make its money by charging an annual fee of €2,500 per site for a 12-month licence. Hard cash investment in the business to date has been about €40,000 but McDermott estimates sweat equity to have been in the order of €300,000. The company is now seeking to raise €750,000.