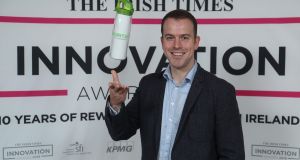 Neil Foster, Head of Strategic Partnerships at Nuritas. “We are going to change the face of healthcare using AI. We are using it to bring better treatments to a lot of unmet medical need.”

Peptides are naturally occurring biological substances that can possess beneficial health and wellness properties. Typically used for preventative health and therapeutic purposes, they can be incorporated into foods and personal-care products to deal with conditions such as diabetes and can be developed into drugs to treat diseases.

The difficulty has been in finding and isolating the beneficial peptides and figuring out exactly what they do. Billions of peptides exist in nature and the traditional method of finding the beneficial ones has involved a degree of guesswork, coupled with an exhaustive – not to say exhausting – process of elimination through laborious testing.

This problem has been addressed by Dublin-based Nuritas, by bringing the power of artificial intelligence (AI) to bear on it.

“The company was founded in 2014 by Dr Nora Khaldi, ” says chief executive Emmet Browne. “Her background was in pure mathematics and she then moved into bioinformatics. Nature provides a very deep resource of bioactive ingredients, so bountiful that it runs into billions if not trillions of options. Dr Khaldi developed a platform which utilises AI and machine learning to open new smarter, faster and more accurate pathways to discovery of these bioactive ingredients. The platform lifts the blanket on nature to identify what the peptides do.”

The platform enables the reversal of the traditional discovery process which targeted the peptides to find out what they might be useful for. “The first question is what illness or disease you are looking to target,” says Browne.

“The machine is learning everything that is known about peptides and utilises that knowledge by looking at nature to find the best-matching bioactive ingredients for the target. Instead of using the traditional discovery method, Nuritas starts with the identification of a target for which a peptide may be useful. We then deploy the discovery engine to identify candidate molecules that are tested directly in our integrated wet lab in Dawson Street in Dublin. After that we move from animal and on to human testing. If successful we can license the bioactive substance to an industry partner for further preclinical testing and clinical trials.”

Each process further adds to the efficacy of the platform. “We test the results in the real world to validate the platform’s predictions. We feed back the results of those tests into the system to further improve its prediction capability. The prediction rate has improved greatly over the past five years as a result.”

Brown joined Nuritas in late 2014 when it employed just four people. “I had been working in the pharmaceutical industry for 25 years at that time but what Nuritas was doing blew my mind.

The company was using 21st century technology to solve age-old problems. It produced its first bioactive ingredients around that time and what has happened since is that the accuracy rate has improved greatly. Very importantly, the platform is able to predict scalability as it can often be the case that a promising peptide is not scalable.”

Nuritas has since grown to 60 staff, most of whom are based in its Dawson Street headquarters. “We have an office in the UK and recently opened one in Boston. We are now looking at opening China within the next six months.”

The company has three main lines of business, he explains. The first is to partner with industry to find peptides for targets identified by the customer. The second is to identify bioactives which can then be either licensed to an industry partner or further developed by Nuritas. The third is the development of consumer products such as ingredients for functional and health foods, again either on behalf of partners such as Nestlé and BASF or on its own account.

“We have a number of our own assets discovered by ourselves and we incubate them internally,” says Browne. “For example, we have discovered an interesting product which has shown potential for the treatment of fatty liver disease. We bring this through the pre-clinical phase and then move on to license it to a partner or do the clinical trials ourselves.”

Business is good, according to Browne. “Companies recognise that they need to innovate and to speed up the discovery process. We are not profitable yet, but we are well ahead of target and will be profitable in a short number of years. We are going to change the face of healthcare using AI. We are using it to bring better treatments to a lot of unmet medical need. We want to grow to deal with some of the big problems out there. For example, a number of years ago we discovered a peptide with potential for treating diabetes. We are now using that to help people with pre-diabetes. The peptide can help prevent the slide into diabetes. That can make a meaningful difference to people’s lives.”