What’s the innovation of the decade? You decide 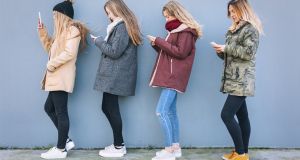 In every corner of the world, people spend hours engaging with mobile screens, while the devices feed a stream of information from the user.

A decade ago, The Irish Times began its effort to recognise Irish innovators through annual awards.

The pace of innovative change these days means we sometimes forget how far we’ve come in such a relatively short period of time. So it’s worth casting a glance in the mirror.

In doing so, we’ve come up with six candidates we reckon are worthy of the title of Innovation of the Decade. Now it’s up to you to vote for the one you think made the greatest impact.

Like any list of this type, it is an invite to debate, discuss and disagree. Timelines, of course, are quite fluid. The roots of many innovations on the list can be traced to earlier decades, or even centuries. Yet their successful application over the last 10 years, is radically altering the world today. Cast your vote online at irishtimes.com/innovationofthedecade. Place your vote and be in with a chance to win a 2 night stay for 2 people in the recently refurbished and luxurious River Lee hotel, Cork, with breakfast each morning in the beautiful surrounds of The Mirror Room and a decadent meal on an evening of your choice in the glamorous Grill Room.

The winning innovation will be announced at the Innovation awards ceremony on November 5th.

From massive work files to your family photos, from your farouire music and movies, to your email archive, it’s all in the cloud. Courtesy of the likes of Amazon AWS and its ilk, the corporate and consumer worlds no longer need to spend vast sums on mass storage devices. And as the world of Big Data makes your information a commodity, the cloud forms the basis upon which it can be mined and traded.

Remember when electric cars were just glorified golf carts and a mobile phone was a brick with an aerial? All that has changed thanks to dramatic innovation in battery tech. From tiny wearables to the electric car revolution, they are all built upon advances in battery tech. This year’s Nobel Prize in Chemistry went to three pioneers in this field and one, John Goodenough, has laid the groundwork for the next big breakthrough: solid state batteries.

Self-teaching tech has long been a sci-fi plotline, but it’s fast becoming reality. On December 7th, 2017, Google’s AlphaZero program defeated the Stockfish 8 program, the world’s computer chess champion of 2016. Stockfish can calculate 70 million chess positions per second. AlphaZero could process only 80,000 per second and its human creators never taught it any chess strategies. However, AlphaZero used the latest machine-learning to teach itself all the strategies and moves in just four hours. Out of 100 games AlphaZero won 28 and tied the rest. It never lost a game.

From voice recognition systems to Alexa and Google home devices, we are getting a glimpse of what the future holds in terms of our interaction with AI.

The moral hazards for humanity of self-learning computer programmes are still being assessed, but the implications are enormous. Your next work colleague really could be an android.

Altering a bit of text on a page can change its meaning: fixing a typo, perhaps, or replacing a word that doesn’t quite work. Now scientists have figured out how to precisely target edits in the “letters” of DNA in a cell with a system called Crispr-Cas9. Since it became more available as a tool for scientists in 2012, Crispr-Cas9 has been widely adopted in labs, where it provides a precise way to alter DNA in cells.

The technology comes with enormous ethical implications, particularly when applied to humans. Used responsibly though, Crispr/Cas9 is enabling a deeper understanding of how genes work and could directly open the way to developing new variants of crops and to tackling diseases in the future.

While some may question whether the negatives outweigh the positives, apps such as WhatsApp, Instagram and Tinder have changed the way society interacts.

Politicians plot and gossip on WhatsApp groups, news, views and cultural references are aired on Instagram and Snapchat, while Tinder – and the dozens of spin-off apps created in its wake – have revolutionised the way we make relationships.

The mass move to touchscreen opened a window to the world of apps. In every corner of the world, people spend hours engaging with mobile screens, while the devices feed a stream of data about users. Consider how marrying GPS technology with smartphones means we don’t get lost these days, and how it has allowed multiple businesses and apps to piggyback on our location information. The long-term consequences are still being assessed, but few could disagree that these glass screens have changed our lives.