Bold: Jewellery that can send a text for help 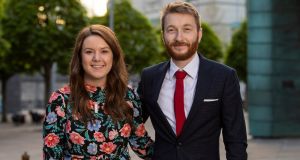 The pendant may look just like a piece of modern jewellery, but it has hidden depths. The Bold pendant doubles as a safety device that can send a text for help if the wearer feels in danger. The company behind the device is Stand, which was launched in June by Emma McQuiggan and Ben Lindsay who have recently graduated with masters’ degrees in product design engineering from Queen’s University Belfast.

The impetus for Bold came from McQuiggan who had never felt comfortable walking alone at night. “I was constantly worrying and fear surrounded me,” she says. “This made me think of all the women and men who constantly feel like this, lacking peace of mind and feeling unsafe. We wanted to do something about it.”

Before starting on their design the founders spoke to charities working with victimes of sexual assault. What surprised them was how opposed these charities were to rape alarms. “In their experience, they don’t work and may escalate the situation,” Lindsay says. “It’s hard to distinguish one alarm from another and the success of a rape alarm depends on a stranger being willing to intervene. The other issue is that people are embarrassed to be seen carrying a ‘medical device’ style alarm around with them.”

Bold is a discreet pendant that can be worn around the neck or wrist or attached to a key chain. It has a metallic finish and comes in gold, rose gold and silver. It will be priced at €169, a one-off payment unlike the prevailing subscription-based market model .

What makes Bold very different to other devices is that it is not smartphone dependent. Instead it is fitted with a module that uses the new NBIoT (narrowband Internet of Things) cellular standard rather than Bluetooth to create its built-in GPS tracking. Because it’s using narrowband it can only send limited information but this also means the device is small and light to wear.

To activate Bold the user presses the button once. This sends their location and a text that reads “watch over me” to the pre-loaded number of a family member or friend who then knows the user is out and about. If the button is pressed twice it sends the location plus a text asking the recipient to phone the person in 10 minutes to check they’re OK. If the button is pressed and held it sends the location plus a text reading “Send help immediately.” Texts can be sent to up to five numbers.

“If someone is leaving work to walk home in the dark they might send the first message to a flatmate. If they’re in a bar and feel harassed they might send the second text to a friend or family member and if they are in a dangerous situation the third text can be sent to everyone,” Lindsay says.

Initially, Bold will be aimed at women aged 18-26 as Lindsay says their research shows a heightening of awareness around personal safety and sexual assault among this group. “It seems something happens in late teenage years, maybe exposure to new experiences or beginning to live alone, that makes this group feel more vulnerable,” he says.

The product has been developed on a bootstrapped budget of £23,000 (€26,600) which has primarily come from grant aid. The company is now looking for angel investment to fund the final pre-launch stage which includes device certification.

The founders are planning a crowdfunding campaign for next June with the dual purpose of raising money and ramping up awareness of Bold which is due to go on sale in September. The product will be sold online backed by strong social media marketing. Once Bold has found its feet with its initial target market, it will be tweaked for use by other groups such as older people.