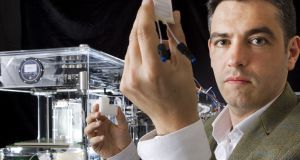 Prof Lee Cronin: “One day people might do this in their houses but not now.”

Picture this: you need a medicine but your illness is so rare that the required drug is extremely expensive and not widely available. Or maybe you are travelling and the drug you need can’t be easily shipped all the way to you. Could three-dimensional printing offer a solution? Could a local, 3D-printed mini-factory make medicine for you?

Three-dimensional printing, which builds up layers of materials to print a product, is making its mark in the world of medical devices, opening up new ways to make implants and biocompatible scaffolds.

Using the technology to manufacture medicines is still niche, but interest is there. A 3D-printed drug has been approved by the Food and Drug Administration in the United States, and researchers are starting to prise open the potential of 3D printing low-cost equipment to build the chemicals needed for drugs.

One researcher with no shortage of ambition in this area is Prof Lee Cronin, who has combined his interests in computer programming and chemistry to come up with 3D-printable ‘kits’ that guide the synthesis of specific chemicals.

“We have developed a 3D-printed plastic mini-factory,” says Cronin, who holds the Regius chair of chemistry at the University of Glasgow. “All the containers are positioned in such way in this plastic block that when you inject chemicals they can’t do anything else but react and give you the drug you want.”

In practice, you download the digital blueprint that is specific for the chemical that you want to make, then you use a 3D printer to the make the “reactionware” and then you add all the ingredients in the prescribed order, he says – “It is a chemical version of making an Ikea chair.”

Cronin has been developing the idea for several years, and last month his lab published details in the journal Science of prototypes to make the active ingredients of different drugs.

But before you entertain notions of synthesising your medicines as you wait for your coffee to brew in the morning, Cronin says home use is not realistic in the near future. “One day people might do this in their houses but not now, there is so much needed for regulation,” he says.

Instead Cronin sees the mini-factories as useful for chemists in labs who want to make chemical compounds quickly and cheaply, or who want to experiment with making new compounds. “It takes a lot of the hard work out of building chemicals and it means they can get on to doing the science, and looking for new drugs or quickly making tracer molecules to track things in the body,” he says.

He recognises that his “print and make” approach attracts scepticism, not least because of the issues with regulation, the potential for misuse and the need to ensure purity of the chemical product.

But he has plans to build encryption and validation into the system as safeguards against questionable uses or batches, and he believes that converting chemists in the lab to his approach is an important step. “I want them to see that this saves them time and lets them build new molecules,” he says.

Cronin believes that combining digital blueprints with 3D-printed kits could ultimately boost personalised medicine by bringing down the cost of making small amounts of specific drugs for specific patients, claiming that the technology could extend to a finished product. “We can easily add on a formulation module [to deliver the active ingredient in a tablet or liquid] and these specific drugs could be made locally in hospital labs using our approach. It means we can make medicine even more personalised.”

He also reckons the approach would make drug counterfeiting a less profitable endeavour, because the real versions would be relatively easy to synthesise. Also, you could manufacture medicines in places that may be out of reach of the traditional supply chain. “If I go to Mars, if I take a 3D printer with me and blueprints, I can make drugs we need on Mars,” says Cronin.

The vision of a more distributed model of making medicines is tempting, and University College Dublin engineer Dr Philip Donnellan is developing miniature plants so pharmaceuticals can be made anywhere in the world. Again 3D printing offers agility.

“We are striving to develop an environment where engineers will be able to create industrial levels of medicines in something small enough to fit in the back of a van,” says Donnellan, an assistant professor at UCD’s school of chemical and bioprocess engineering.

“In essence, we are using mathematical modelling and simulations to figure out exactly what is going on in the manufacturing process and how we can use this information to create these miniaturised, self-contained production plants. The fact that we can then use 3D printing to create these processes means that we have huge scope in terms of designing required reactors and other units leading to significant size, cost and efficiency improvement potential.”

According to Donnellan, they have used this approach in UCD to produce the equivalent of 10 tonnes of material per year in a 2x15cm reactor that cost less than €1,000.

Like Cronin, Donnellan sees the benefits of the distributed approach in boosting personalised medicine. “The advantage of using small-scale, self-contained, low-cost manufacturing systems is that these could enable pharmaceutical companies to have many mobile or semi-mobile manufacturing facilities distributed throughout the world which would enable drugs to be manufactured at a lower cost, closer to the patient themselves,” he says.

“This could lead to much greater flexibility in terms of creating different drug variations and more personalised medicines, which might not be economically viable today and could also achieve much greater access to medicines for people in all geographical regions.”

The design freedom offered by 3D printing is already transforming the medical device and diagnostics industry, according to Barry Heavey, life sciences lead with Accenture Ireland, but it remains somewhat niche on the pharmaceutical side, in part because of the regulatory environment.

“3D printing is likely to be adopted more aggressively by medical device companies versus pharma companies because of the more transformative impact on medical device products and processes,” he says.

“Most major pharma companies are investing in and exploring innovative manufacturing methods . . . However, the transition between interest and mainstream adoption can be slow and unpredictable in the highly regulated pharma manufacturing space.”