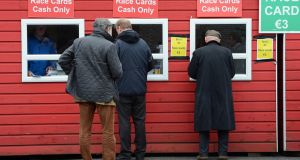 Racegoers at Punchestown: the racing festival is expected to deliver a €64 million boost to the local economy. Photograph: Eric Luke

Independent News & Media has hired American investment bank Lazard to advise it on a potential sale for the company, which has attracted the interest of at least two unnamed potential bidders, according to the Sunday Times.

The newspaper said Lazard was working with INM’s broker, Davy, on the matter. INM, which is almost 30 per cent owned by Denis O’Brien, said earlier this month it had received a preliminary takeover approach from an unnamed suitor.

Baked goods company Aryzta is preparing the sale of its UK logistics business in a deal expected to raise £20 million (€23.1 million), according to the Sunday Independent.

Chief executive Kevin Toland presided over the sale of a raft of Aryzta assets last year, including Irish restaurant supplier La Rousse, its troubled Cloverhill Bakery facilities in Illinois, and its 50 per cent stake in British naan bread firm Signature Flatbreads. In total they have raised almost €140 million.

The Sunday Independent also reports that the Department of Finance is seeking an “urgent” consultation with the European Central Bank on its views on a Sinn Féin Bill that would prevent banks from selling loans without borrowers consenting.

The No Consent, No Sale 2019 Bill, which has passed an initial vote in the Dáil, has faced criticism from figures including Central Bank governor Philip Lane and Department of Finance officials, who have argued that the draft laws would hurt the financial system and lead to higher interest rates if enacted.

Martin Shanahan, chief executive of IDA Ireland, has called on the Government to clarify the situation on new building heights in Dublin, according to the Sunday Business Post.

Minister for Housing Eoghan Murphy abolished the maximum height cap in urban areas late last year, but confusion has continued ever since, with a stand-off recently between developer Johnny Ronan, the developer of the Salesforce Tower in Dublin’s north Docklands, and Dublin City Council over the interpretation of the new rules.

The promoters of Punchestown Festival this week have estimated that the event, which began in 1823, will deliver a €64 million boost to the local economy in Co Kildare, the Sunday Business Post reports.

The festival has seen a 9 per cent increase in pre-ticket sales for the races, which count as one of the seven big festivals in the Irish horse-racing calendar. It is expected that 130,000 people will attend Punchestown this year.