How much more are you willing to pay for fuel to save the planet?

Chris Johns: No policy maker has been able to implement the changes eco-warriors want 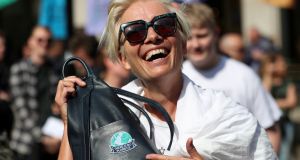 Bank of England governor Mark Carney forged an unlikely – and no doubt unwitting – alliance with London’s climate change protesters this week: a warning to banks and financial markets that behaviour has to change. Carney, along with his counterpart from France’s central bank, told investors that capital has to be massively reallocated in the face of potential catastrophe from global warming.

These warnings coincided with parts of London being shut down by people as far removed from central banking as it is possible to imagine. But these protesters delivered a similar message to Carney’s, albeit one with a very different practical import.

What does “massive reallocation of capital” mean? It is finance-speak for a number of possibilities. Most obviously, investment returns from companies in the oil and gas sector may not amount to very much in the years ahead. Activists believe that most, if not all, carbon-based fuel sources should remain firmly underground.

While that may not be the most achievable of objectives, it is worth noting that big investors – including Norway’s sovereign wealth fund, Blackrock and Legal & General – have been making similar noises: all of these groups say investors must take much more notice of the environmental impact of their decision-making.

More generally, environmental, social and governance (ESG) investing has gone mainstream. It’s a method of deploying capital that has been around for years but, until relatively recently, has been a minority activity.

There is no precise definition of ESG investing – it can mean very different things to different people. Some investors place more emphasis on, for example, the social rather than environmental (or vice versa). And some of the definitions can be quite slippery.

Every business, like every individual, has an environmental impact: how big does this have to be before the company concerned deserves to be boycotted? Are banks intrinsically ethical businesses? Once you start asking questions like these, they never seem to end.

From the investor’s perspective, the tricky question focuses on the impact that ESG factors have on returns: does being an ethical investor make or lose me money?

The data is equivocal: some styles of ESG investing have, historically, been money makers. Other styles, not so much. Tobacco stocks are the usual example: not the healthiest of investments, from one perspective at least, but these companies have, for decades, been fabulous investments from a purely financial point of view.

Central bankers, we can presume, believe that markets will, with the odd nudge here and there, be a big part of the solution to the risk of impending climate catastrophe. The price of solar and wind energy in many parts of the world has continued to fall exponentially and is now competitive – or in some cases even lower – than electricity produced by fossil fuels.

There is much chatter about impending leaps in storage (battery) technology that are essential if the intermittency problem is to be solved: the wind doesn’t always blow and the sun doesn’t always shine.

It is always worth pointing out to market fundamentalists that the quite extraordinary leaps in solar and wind efficiency could not have happened without, initially at least, huge government subsidies, particularly of the Chinese variety. Investors and governments need to be part of what happens next, both in terms of alternative energy production and carbon capture technologies.

The protesters in London and elsewhere worried about extinction won’t be too bothered by any of this. The finer details of a cost-benefit analysis are unlikely to be of much relevance if the thing that you are trying to avoid is the end of humanity.

Anyone less convinced about impending apocalypse – but willing to acknowledge the long-term risks from climate change – will think carefully about Carney-style warnings.

Hard heads need to be combined with soft hearts. We can sympathise with the worries of those fretting about extinction. It must be grim to be so concerned. But these people offer nothing practical. No single policy maker, government or collection of governments has been able to implement – let alone design – the kind of changes demanded by eco-warriors such as the actor Emma Thompson and the other London protesters. Environmental worries – prompted by credible and growing scientific consensus – have been around for decades. We can only pull on the policy levers we have available to us. That’s what the central bankers are trying to say.

There is no point fantasising about imaginary solutions that stand zero chance of implementation. Arguing that we need to ground all aeroplanes, never use cars again and turn into vegans misses an important point: if these actions are necessary to avoid extinction they will, nevertheless, never happen. The end is, indeed, nigh.

We can only hope that the more extreme predictions are wrong – most forecasts of any kind are usually way off the mark – and listen to the pragmatism of the central bankers. Lots can and must be done. More carbon taxes, for example, are the practical test of our climate seriousness. How much are you willing to see petrol and diesel prices rise?