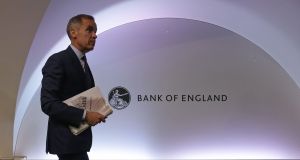 UK chancellor Philip Hammond has fired the starting pistol on the government’s search for a new Bank of England governor to replace the central bank’s current chief, Mark Carney

UK chancellor Philip Hammond has fired the starting pistol on the government’s search for a new Bank of England governor to replace the central bank’s current chief, Mark Carney.

The advertisement was posted on Wednesday morning with an annual salary of £480,000 (€555,000), the same as when Mr Carney was appointed in 2013, although the Canadian also received a generous housing allowance of a little over £250,000 a year.

Mr Hammond stressed his preference for an internationally respected replacement for Mr Carney, who will step down in February. “It is very important to have someone, not only who can do a first-class job at home, but someone who commands respect in the international arena,” he told the Commons Treasury committee on Wednesday.

The new governor will take over at the BoE with interest rates stuck near zero and huge uncertainty hanging over the UK due to Brexit.

The economy has a split personality, with a strong labour market and record employment offset by sluggish output growth and feeble productivity. The contradictory picture means questions around the future direction of interest rates will be daunting, since policymakers have limited insight into how hot the economy is running.

The advert calls for potential candidates with “substantial experience of working at the most senior level in a major bank or other financial institution or of working in, or involvement with, central banking”.

Andrew Bailey, head of the Financial Conduct Authority, is seen as the most qualified British public sector candidate, although deputy BoE governors Ben Broadbent and Jon Cunliffe are expected to be interested in the role.

Other possible UK candidates include Shriti Vadera, who chairs Santander UK and has recently helped co-ordinate the City of London’s response to Brexit. Minouche Shafik, director of the London School of Economics, would also be a well qualified candidate, having previously served as a BoE deputy governor.

Potential international applicants include Raghuram Rajan, a professor of economics at the University of Chicago who led the Reserve Bank of India and is a former chief economist of the IMF. He has said he has a good job in academia, but has not ruled out the possibility of taking the BoE role.

Outsiders for the role include Andy Haldane, the BoE’s outspoken chief economist, and Sharon White, chief executive of Ofcom, who was previously a senior Treasury official.

Mr Hammond said he hoped to appoint someone who was committed to serving a full eight-year term, but was willing to make an exception for an “outstanding candidate”. “My preference would be of an eight-year term,” the chancellor said. “Stability has a value.”

Mr Carney was appointed for eight years, but said he would serve only five and then twice extended his tenure, creating a degree of uncertainty over the position. Treasury officials are clear there is no chance Mr Carney will extend his tenure again.

The hiring process will be overseen by an executive recruitment company for the first time to ensure that all options are explored and that the government has considered diversity issues. The Treasury has appointed Sapphire Partners, the headhunters who helped it hire two external members of the BoE’s Financial Policy Committee last year.

Candidates have six weeks to apply, with interviews scheduled for the summer. The decision will be announced in the autumn to give the successful applicant sufficient time before starting the role at the beginning of February 2020.

However, the autumn announcement means that priorities for the job could change should prime minister Theresa May no longer be in office - a new prime minister and chancellor may have a very different type of candidate in mind.

As a crown appointment, the BoE governor is formally selected by the Queen, but the recruitment panel will include Tom Scholar, permanent secretary to the Treasury; Charles Roxburgh, the second permanent secretary; Brad Fried, chairman of the BoE court of directors; and Kate Barker, a former external Monetary Policy Committee member, who has been the senior independent panel member on many Treasury appointments. – Copyright The Financial Times Limited 2019