How to prevent Armageddon in retail? Late opening, selling online and quality 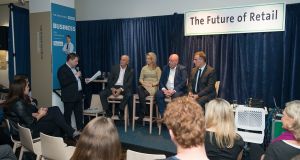 The Inside Business podcast being recorded before a live audience in the GPO.

One of the best known faces in Irish retail, Maurice Pratt, has said an Armageddon” in US retailing, that has led to mall closures, layoffs and shrinking profits for big-name stores, will come to Ireland due to the growth of online sales.

Mr Pratt, formerly of Quinnsworth, Tesco Ireland and Brown Thomas and current chairman of Unipharm chain of pharmacies, was speaking at a live recording of The Irish Times Inside Business podcast that took place in the Witness History Museum at the GPO on Dublin’s O’Connell Street on Tuesday evening.

“If you look at the impact digital has had in the United States, I think is instructive in terms of what will happen here in time” said Mr Pratt. “Many of the large malls have closed. Simply because people have moved to shopping much more on line. So that is on its way here”

Mr Pratt predicted a new role for shopping centres of the future.

“At least 50 per cent of the mall will be entertainment and food and only 50 per cent will be pure selling. And within what you’re selling, a lot of it is actually going to be showrooms for luxury goods retailers, where people will come try on the goods and go home and buy it online.”

Lorraine Higgins, deputy CEO of Retail Excellence, which represents some 1,700 companies in the Irish market, said Irish consumers are spending €850,000 online per hour, but with the lion’s share – 70 per cent – going to UK retailers.

Ms Higgins blamed this on the fall in the value of Sterling since the Brexit vote combined with lower UK VAT rates, which she said are “hammering Irish retail”.

Ms Higgins called for the Government to increase the grant available to entrepreneurs to develop their online presence.

“It’s quite astounding that 22 per cent of Irish SMEs (small to medium enterprises) have no presence whatsoever online, and of those three quarters can’t process payments, so they can’t take advantage of that spend throughout Europe,” she said.

An Post CEO David McRedmond, a former operations director with book retailer Waterstones, said his former employer’s book sales are now increasing thanks to its instore experience, despite fierce competition from Amazon.

“Whether it’s Waterstones, whether it’s Dunnes Stores, or back to Maurice’s idea of the mall being a place for entertainment, retailing really has to be excellent,” said Mr McRedmond. “It has to be so much better than the experience that you can get online, to get people to come and touch and feel and do all of that. That really matters”.

Richard Guiney, CEO of business representative group Dublin Town, said consumer research revealed people would do more of their shopping in-store if shops stayed open later, and that retailers are missing out as consumer habits change.

“The peak of online retail happens between six o’clock and eight o’clock in the evening, and it’s conducted on mobile devices. So you don’t need to be Einstein to figure out that this is a lot of commuters going home who are taking out their phones and buying things,” said Mr Guiney.