Unemployment at its lowest level in over nine years 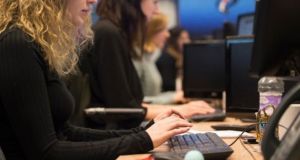 Unemployment has fallen to a new post-crash low of 6.1 per cent, according to the Central Statistics Office.

The latest CSO figures show that the number of workers classified as unemployed fell by 200 to 133,200 on a seasonally adjusted basis in September, which equates to an annual decrease of 31,600.

Having peaked at 15.2 per cent at the height of the crash in 2012, the State’s jobless rate is now three points below the euro zone average of 9.1 per cent.

On current trends unemployment could fall below 6 per cent this year, which is close to full employment in Ireland.

The Economic and Social Research Institute has warned that the economy runs the risk of overheating at this level of unemployment.

This makes it all the more important to attract highly qualified immigrants to address skill shortages in the economy, he said.

He said recent CSO data show that 64 per cent of immigrants coming to Ireland have a third-level qualification, while only 44 per cent of those leaving do. “This suggests a welcome brain gain, as Ireland’s position as one of the fastest-growing economies in Europe can attract highly educated candidates for available jobs,” he said.

He also noted that the adjusted youth unemployment rate remained elevated, even though it dropped to 14.8 per cent last month from 15.3 per cent in August.

“Although it has fallen from 18.2 per cent at the beginning of 2016, the bottom line is that youth unemployment is still far too high,” he said.

“The Government needs to put particular focus on getting this rate down into single digits and quickly, though that is easier said than done,” he added.

Mr McQuaid said that, while emigration has been a factor to some degree in keeping unemployment down in the immediate aftermath of the financial crisis, the labour market has improved dramatically over the past few years, reflecting the strengthening of the economic recovery.

He noted that employment rose in 11 of the 14 economic sectors on an annual basis in the second quarter of 2017, with the greatest rates of increase posted in the information and communication (+9.3 per cent or 7,800) and construction (+7.7 per cent or 10,600) sectors.