Less than a year on, mRNA inoculations look likely to change the industry forever 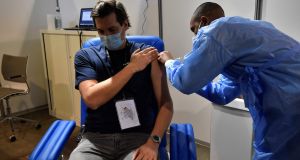 A Belgian is vaccinated at the Brussels Expo facility.

GlaxoSmithKline, Merck and Sanofi are now left playing catch-up, after upstarts including Moderna and BioNTech demonstrated their mastery of new technologies that will shape the industry for years to come.

New Jersey-based Merck recently dropped its vaccine development programme completely, while Paris-based Sanofi and the UK’s GSK are having to redo an early-stage trial of the jab they are jointly developing, after a dosing mistake.

According to Zain Rizvi, a medicine access researcher at advocacy group Public Citizen, the “immense scarcity” of vaccines around the world is directly connected to these big pharma groups being “missing in action”.

The vaccine market already looks completely different this year – and depending on variants in the virus that causes Covid-19 and the need for boosters, some of the changes could stick.

In 2020, GSK, Sanofi, Merck and Pfizer dominated the market with best-selling vaccines for flu, pneumonia, HPV and shingles. Among the top vaccine makers, only Pfizer has a successful Covid-19 vaccine, developed with German company BioNTech.

This year, life sciences data platform Airfinity forecasts Pfizer will triple its vaccine revenue thanks to its Covid-19 vaccine, while vaccine sales at Novavax and Moderna will overtake those at Merck, GSK and Sanofi.

Even the cheaper vaccines from AstraZeneca and Johnson & Johnson means they are forecast to generate more vaccine sales in 2021 than some of the top four did in 2020.

The share prices reflect this dramatic change. Since the start of 2020 Novavax has rocketed more than 6,400 per cent, Moderna is up over 850 per cent and BioNTech more than 190 per cent. GSK, Merck and Sanofi shares have fallen between 13 and 30 per cent.

It is the new messenger RNA technology – which instructs the body to make part of the virus to provoke an immune response – used by BioNTech/Pfizer and Moderna that has ripped up conventional timelines and allowed them to produce trial vaccines for testing within weeks.

But their success was far from assured: before the pandemic, no mRNA vaccine had ever been approved and in May, Ken Frazier, Merck’s chief executive, said the idea of producing a new vaccine in 12 to 18 months was “very aggressive”. Less than a year on, mRNA vaccines look likely to change the industry forever.

For the interlopers, the crisis was an opportunity. Peter Hotez, a vaccine expert at the Baylor College of Medicine, said they had more to gain, so pushed hard for regulatory acceptance and financial support from governments.

“The ones who rushed into this were not the big vaccine companies. They were companies that were interested in accelerating their technology,” he said. The first approval for mRNA vaccines has come three or four years ahead of Moderna’s previous projections, because of the pandemic.

The crisis also accelerated vaccine programmes at Johnson & Johnson, which entered the market by acquisition in 2011 after a prior partnership with Crucell in the Netherlands, and AstraZeneca, which had no conventional vaccine on sale, just an unusual inhaled version for flu.

The big three incumbents preferred to prioritise their tried and tested methods. “Companies tend to rely on their proprietary technologies because they think they can trust them – and don’t want to infringe on rivals’ intellectual property,” said Mansoor Amiji, professor of pharmaceutical sciences at Northeastern university.

Merck’s efforts were mainly based on its own Ebola vaccine and a candidate being developed by an Austrian biotech it bought last year. Ken Frazier in May said it helps to “start with hardware you know”, and that there were questions about how the new approaches would be scaled up.

Yet Merck walked away from both of its trial vaccines after disappointing early test results. The Sanofi/GSK vaccine has been delayed by about six months after trial participants were mistakenly given a less concentrated dose, resulting in data that showed a weaker immune response in older people.

Soren Christiansen, Merck’s former head of vaccine development, now chief executive of Sharps Technology, said that after early negative data, Merck probably concluded it had “missed the boat” and that mRNA vaccines were likely to become “a very competitive market”.

“It’s all about decision-making and do we want to take the risk on allocating resources and money and people to do something like Covid-19?” he said.

Before the pandemic, Pfizer and Sanofi had both begun to dabble in mRNA vaccines through partnerships – but Pfizer’s partner BioNTech was far further along than Sanofi’s partner Translate Bio, which had not yet tested its method of delivering the mRNA into people.

When Covid-19 hit, Sanofi initially prioritised the technology it uses for its flu jab, which is a recombinant-protein based vaccine, even though it takes longer to get a programme of this type off the ground.

It therefore did not begin testing in humans until September 2020. In parallel, in March it announced that it would work with Translate Bio on an mRNA Covid-19 vaccine.

Rather than develop its own vaccine from scratch, GSK decided to offer its “adjuvant” – an ingredient that can be added to vaccines to boost immune response – to several vaccine makers, most prominently Sanofi. This surprised some in the industry, who thought GSK the obvious partner for Oxford university’s vaccine development. In the event, it was AstraZeneca that worked with Oxford.

Dan Mahony, who co-leads the healthcare business at Polar Capital, said it was “a bit weird” that it was not GSK, the UK’s largest vaccine maker, that stepped in to help with the UK’s homegrown vaccine.

Thomas Breuer, chief medical officer of GSK Vaccines, said the company chose to prioritise the adjuvant, including hiring hundreds of people to expand manufacturing, as this was deemed the “broadest contribution” it could make to fighting Covid-19. The GSK adjuvant is being used by Canadian biotech Medicago, which is about to enter phase 3 trials, as well as by Sanofi.

Mr Breuer said the Sanofi trial delay was “disappointing and unfortunate, but early science is unpredictable”, though he still sees “great promise” in the data.

Some suspect the big three vaccine makers may have also been wary of being distracted from their core businesses by wholeheartedly pursuing a Covid-19 vaccine. Previous epidemics, including Sars and Mers, have run their course before a vaccine was ready or pharma groups had even been able to complete trials.

“The failure of three of the largest vaccine producers in the world to take a crisis seriously and respond with an all-hands-on-deck response is indicative of the larger failure in the industry business model to prioritise public health needs,” said Rizvi from Public Citizen.

Hotez from Baylor College said it may have been a case of “once bitten, twice shy”. Sanofi spent more than a decade developing a dengue fever vaccine but it flopped after it raised the risk of the disease in some children. GSK invented the first malaria vaccine – but it took 30 years. Merck’s Ebola vaccine had been a “humanitarian triumph” – but it was not a moneymaker.

Until about 15 year ago, vaccines had been a “backwater”, said Mr Mahony. New growth products such as Merck’s Gardasil, for HPV, and GSK’s Shingrix, for shingles, “broke the mould”, he said, but they were not enough to entice companies to pour money into development. When pharma companies were retrenching 10 years ago, he suspects early stage vaccine programmes were among those cut.

Instead, drugmakers have invested in blockbuster drugs to treat cancer and rare diseases, where technological leaps have fuelled demand and higher prices.

Even a year ago, vaccines were still seen as “stable, good businesses” but “unsexy”, said Laura Sutcliffe, an analyst at UBS. “Now that’s all changed, investors are paying more attention,” she said.

Jo Walton, an analyst at Credit Suisse, said the incumbents had reaped the benefits as “amazingly large businesses with apparently high barriers to entry. It’s very, very expensive to build one of these vaccine facilities,” she said.

But she said one of their major advantages in the routine vaccine market – their distribution networks - did not give them an edge during the pandemic, when governments have largely taken over delivery.

With Moderna and BioNTech hoping to use their Covid-19 success to march into other vaccine markets, the incumbents are now turning their focus to mRNA.

In June, Sanofi expanded its partnership with Translate Bio, a US-based company that it has worked with since 2018 to explore mRNA vaccines for all infectious diseases. The pair plan to begin testing an mRNA Covid-19 vaccine in the first quarter, and an mRNA flu vaccine at some point this year.

Ron Renaud, Translate Bio’s chief executive, said Covid-19 is giving Sanofi a “preview” of how useful mRNA could be in flu, a market where it is the largest competitor and that generates the company about €2.5 billion a year in revenues.

GSK, which had previously partnered with German biotech CureVac, announced last week it will extend the partnership to include CureVac’s Covid-19 jab. The UK drugmaker will help with manufacturing of the mRNA vaccine and the two will work together to develop a vaccine to target many strains of the virus at once, projected to arrive in 2022.

It hopes to be a “fast follower”, Mr Breuer said. “At the start of the pandemic, mRNA was unproven and GSK’s own mRNA platform was not as prepared as some of the specialist players to move immediately,” he said.

“When variants started to emerge and it became clearer that existing vaccine efficacy declined for some variants, we felt GSK could play a leading role in the development of next generation vaccines.” – Copyright The Financial Times Limited 2021