Skaters in the Netherlands have been warned of the dangers of thin ice after a rise in temperatures caused groups of people to fall through the ice into the country's frigid waterways. Video: As credited 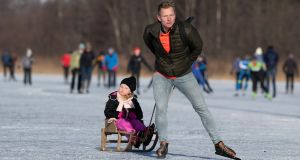 There are bellyflops, and then there is skating, while half-naked on a half-frozen river, into a melting patch and landing face-forward into a mix of ice, slush and very cold water.

This is an experience that at least one Dutch ice skater – and Twitter users who have watched the video footage 5.2 million times – are familiar with.

The video, posted on Monday, was captioned with the hashtag “ijs niet overal goed”, or “the ice isn’t good everywhere”. After plunging into the icy depths of an Amsterdam canal, the swimsuit-clad skater appears to be fine, if surprised, declaring his fall a “face plant”.

Eventually, he is helped by another skater who risks the same fate to throw him a rope. The man slides out of the water and on to the ice on his stomach, then stands up and gives a bow to spectators before skating away.

Wearing a bathing suit had its advantages: other skaters who broke through the ice had to climb out while dressed in water-logged puffer jackets and other winter gear. One woman was placed on a ladder lying flat on the ice and dragged to shore by emergency workers. Others were rescued by onlookers using hockey sticks.

On Sunday, the Dutch had a rare chance to hit the canals after they froze over for the first time in almost three years.

Hard ice proved risky, too and some skaters took tumbles that landed them in hospital, despite an official plea to spare overstretched emergency services.

Netherland’s authorities had declared a rare “code red” emergency as Storm Darcy sent temperatures plummeting to -5 degrees, in the first snow storm to hit the country in a decade.

Elsewhere in Europe, officials asked people to stop skating on thawing lakes. In Berlin on the weekend, police in helicopters urged skaters to leave the ice, the BBC reported.

In northern England, skaters have been trying to recreate moves seen on the reality show Dancing on Ice on frozen lakes in nature reserves. They have been warned that, in addition to the risks of thin ice, the remoteness of the lakes means that help is far away.

Two girls were rescued after falling through the ice on a river in Nottinghamshire on Sunday, the BBC reported.

The Dutch prime minister, Mark Rutte, had warned against mass skating to avoid the risk of spreading Covid-19 as well as injuries that could clog up hospital emergency rooms.

Nonetheless, the emergency rooms were twice as busy as usual on Saturday as people turned up with broken wrists and other injuries suffered during falls, medical staff associations noted on Twitter.

However, the problem is unlikely to last. Temperatures are predicted to rise to 14 degrees in the Netherlands by Saturday. – Guardian