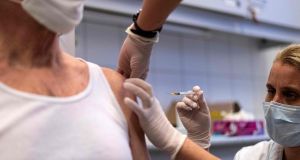 A Hungarian receives on of the first doses of the Russian vaccine. Hungary expects to receive 600,000 doses of Sputnik V and 500,000 doses of Sinopharm’s vaccine this month. Photograph: Getty Images

Hungarian prime minister Viktor Orban has been a strong critic of the EU’s faltering vaccine rollout, and his government has bought enough doses of Sputnik V to inoculate 1 million people and enough Sinopharm for 2.5 million.

The Hungarian regulator has given emergency approval to both vaccines without waiting for a green light from the European Medicines Agency (EMA), which has so far cleared vaccines made by US-German firm Pfizer-BioNTech, US company Moderna and British-Swedish firm AstraZeneca with Oxford University.

“Every day that we would spend waiting for Brussels, we would lose a hundred Hungarian lives,” Mr Orban told Hungarian radio.

“Why would we think that the Europeans are smarter than we are? This isn’t true. Our professionals are at least as good as any European professional, and I don’t trust a [vaccine] analysis in Brussels more than I do in a Hungarian one. In fact, just the opposite.”

Hungary expects to receive 600,000 doses of Sputnik V and 500,000 doses of Sinopharm’s vaccine this month, as part of an accelerating inoculation programme across the country of about 10 million people.

“If we start using the Chinese vaccine, which will happen soon, then by Easter we can vaccinate every person who has registered so far... As things stand now, that will be 6.8 million people by the end of May or beginning of June,” Mr Orban said.

Moscow has dismissed concerns over the transparency of data from its tests on Sputnik V and insists the vaccine is safe and more than 90 per cent effective – claims supported by peer-reviewed interim findings from an advanced clinical trial that were published in the Lancet medical journal this month.

The EU has admitted making mistakes with the planning, approval process and rollout of its own vaccine programme, but insists it is now on track and should be able to deliver inoculations to 70 per cent of adults in the bloc by autumn.

German chancellor Angela Merkel has said that all Covid-19 vaccines would be “welcome” in the EU once they receive approval from the bloc, and she has spoken to Russian president Vladimir Putin about how her country’s experts could advise Sputnik V’s developers on navigating the EMA application process.

The EMA said on February 10th that it had “not received an application for a rolling review or a marketing authorisation for the Covid-19 Sputnik V vaccine, despite reports stating the opposite”.