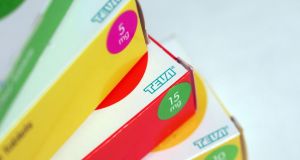 Teva Pharmaceutical Industries Ltd and its Cephalon unit were fined €60.5 million by the European Union for a pact that delayed sales of a cheaper version of a sleep-disorder drug.

Teva received cash payments and struck beneficial commercial side deals with Cephalon that stopped it rolling out a generic version of Cephalon’s modafinil medicine, the European Commission said Thursday in an emailed statement. Their pay-for-delay pact lasted from 2005 until 2011, when Teva bought Cephalon for $6.2 billion.

The fine ends a nine-year probe and concludes a long antitrust crusade against so-called pay-for-delay deals between companies that make branded medicines and generics producers. Such deals prevent customers and health systems buying cheaper versions of drugs as they come off patent.

The agreements are no longer “a big issue” after the EU crackdown and lengthy scrutiny of agreements was taken on board by the pharmaceutical industry, EU Competition Commissioner Margrethe Vestager told reporters in Brussels.

The EU said Teva’s share of the total fine was €30 million, while Cephalon’s was €30.5 million.

Teva said it would appeal to the EU’s General Court.

“We continue to believe that the modafinil patent settlement agreement did not infringe EU competition law,” Teva said in an emailed statement.

Vestager said she would continue to keep a keen eye on the pharmaceutical industry with a potential decision on Aspen Pharmacare Holdings Ltd coming up, she said. – Bloomberg