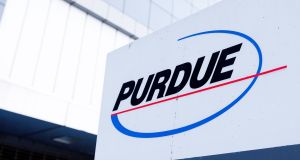 Purdue Pharma has pleaded guilty to criminal charges over the handling of its addictive prescription painkiller OxyContin, capping a deal with federal prosecutors to resolve an investigation into the drugmaker’s role in the US opioid crisis.

The criminal violations included conspiring to defraud US officials and pay illegal kickbacks to both doctors and an electronic healthcare records vendor called Practice Fusion, all to help keep opioid prescriptions flowing.

Members of the billionaire Sackler family who own Purdue and previously sat on the company’s board were not part of Tuesday’s court proceedings and have not been criminally charged. They agreed in October to pay a separate $225 million (€189 million) civil penalty for allegedly causing false claims for OxyContin to be made to government healthcare programs such as Medicare. They have denied the allegations.

Assistant US attorney J Stephen Ferketic said officials reserved the right to prosecute individuals associated with Purdue, including owners, officers and directors. Sackler family members have said they acted ethically and responsibly while serving on Purdue’s board and were assured the company’s sales and marketing practices complied with legal and regulatory requirements.

Purdue chairman Steve Miller entered the guilty plea on the company’s behalf and admitted to its criminal conduct under questioning from Ferketic. Of the three criminal counts against Purdue, two were for violations of a federal anti-kickback law while another charged the Stamford, Connecticut-based company with defrauding the United States and violating the Food, Drug and Cosmetic Act.

Purdue’s plea deal carries more than $5.5 billion in penalties, most of which will go unpaid. A $3.54 billion criminal fine is set to be considered alongside trillions of dollars in unsecured claims as part of Purdue’s bankruptcy proceedings.

Purdue agreed to pay $225 million toward a $2 billion criminal forfeiture, with the Justice Department foregoing the rest if the company completes a bankruptcy reorganisation dissolving itself and shifting assets to a “public benefit company” or similar entity that steers the $1.775 billion unpaid portion to thousands of U.S. communities suing it over the opioid crisis.

A sentencing imposing those penalties is set to come around the time Purdue receives court approval for a bankruptcy reorganisation.

The plea deal and other related settlements have come under fire from Democrats on Capitol Hill calling for Purdue and its owners to face more severe consequences for their alleged roles in the opioid crisis.

The company reaped more than $30 billion from sales of OxyContin over the years, enriching Sackler family members, according to US and state officials. Since 1999, roughly 450,000 people have died in the United States from opioid-related overdoses, according to US data.

Some two dozen state attorneys general have opposed the plea deal on the grounds that it effectively endorses a bankruptcy plan they contend would entangle local governments with a public benefit company that continues to sell OxyContin.

Purdue, which filed for bankruptcy protection last year under an onslaught of litigation, has proposed settling thousands of lawsuits in a deal it values at more than $10 billion. That is contingent on donations of opioid reversal and addiction treatment medications it has under development and a $3 billion cash contribution from the Sacklers, who would cede control of Purdue.

In addition to the kickbacks and vendor scheme, between 2007 and 2017, Purdue ignored doctors suspected of improperly prescribing opioids that were flagged by its internal controls, and failed to report OxyContin prescriptions from these physicians to the Drug Enforcement Administration as legally required, according to prosecutors.

A Purdue affiliate in 2007 agreed to plead guilty to misbranding OxyContin in a deal with prosecutors that resulted in about $600 million of penalties. - Reuters