One of the lead researchers into the University of Oxford's coronavirus vaccine candidate has said that a speedy vaccine rollout could allow health services to return to some sense of normality. Video: Reuters 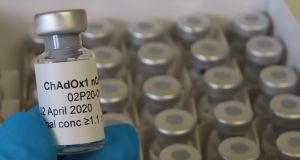 Ten countries are set to be involved in manufacturing the vaccine. File photograph: PA

The coronavirus vaccine developed by Oxford university and AstraZeneca has shown greater than expected efficacy, a landmark finding that will boost hopes there is a way out of the pandemic for countries without access to jabs made by rival drug makers.

All results were statistically significant and greater than the efficacy sought by the US Food and Drug Administration and the European Medicines Agency.

AstraZeneca said it would submit the data for regulatory approval “immediately”.

Dublin-born vaccinologist Prof Adrian Hill, who is head of the Jenner Institute in Oxford where the latest Covid-19 vaccine was developed, has said that “maybe by next May or June we could be back to normal.”

Asked if he could see the light at the end of the tunnel, Prof Hill replied it would start to roll out in the new year. In the meantime people needed to continue to observe precautions, he said.

Operating the roll-out of the vaccine would be very challenging, he added. “What we are doing is unprecedented. Once we get regulatory approval we will be ready to go.”

Ten countries would be involved in manufacturing the vaccine while one facility in India had already manufactured 100 million doses.

Prof Hill said he anticipated regulatory approval would come “in the next couple of weeks”.

Astra’s chief executive Pascal Soriot said: “This vaccine’s efficacy and safety confirm that it will be highly effective against Covid-19 and will have an immediate impact on this public health emergency.”

The vaccine is priced at about $3 (€2.50) to $4 a dose, supply deals suggest, a fraction of that of other vaccines. AstraZeneca has agreed to sell it at cost to developing nations in perpetuity.

The vaccine can be stored long term at normal fridge temperature, between 2 and 8 degrees. Others require a storage temperature as low as -70. Astra is targeting the manufacture of up to three billion doses next year. Depending on regulatory approval, different dosing regimens could mean more doses are available.

Oxford’s Sarah Gilbert, of the university’s Jenner Vaccine Institute, said recently that the main priority for Oxford was to find a partner that would commit to making the vaccine affordably. The medicine’s intellectual property is licensed to AstraZeneca.

In recent weeks, better than expected results from Pfizer-BioNTech and Moderna – showing efficacy close to 95 per cent – spurred widespread optimism and market rallies, though their vaccines are sold at profit, and much of their projected supply for next year has been secured by richer nations.

By contrast, AstraZeneca, along with Johnson & Johnson, has said it will sell its inoculation at cost. J&J trials are ongoing.

AstraZeneca has received approximately 3.2 billion orders of its jab, including from the UK, European Union, United States and others, data by Airfinity shows.

Of those, 400 million have been ordered by the European Union. That is on top of 200 million doses of the BioNTech-Pfizer vaccine candidate, with the option of a further 100 million, and up to 160 million of Moderna’s alternative.

As Ireland is expected to get 1 per cent of EU supplies under pro-rata arrangements, that means the State is in line to receive up to 8.6 million doses of various vaccines. That would be enough to inoculate 4.3 million people, or possibly just shy of five million under the the half-dose option from Oxford-AstraZeneca.

What about older people?

Speaking on BBC radio, Prof Pollard said he heard the results on Saturday evening from the trial’s independent data monitoring committee. “It was me facing the committee,” he said. “Then I was able to talk to Sarah Gilbert and other members of the team. We were delighted because all our efforts had paid off.”

Prof Pollard added: “We saw just a hint [in the trial data] that the vaccine was able to reduce asymptomatic infection. If that is right, we might be able to stop the disease spreading and halt the pandemic in its tracks.”

The difference in efficacy between the two Oxford vaccine doses was unexpected. The scientists speculate that the lower first dose may have primed the immune system in a way that made it more receptive to the second jab but more research will be needed to confirm this. – Copyright The Financial Times Limited 2020/Reuters