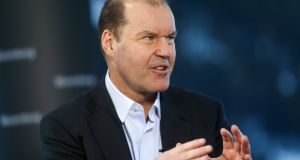 Takeda, the Japanese pharmaceutical giant that last year bought its Dublin-headquartered rival Shire for $62 billion (€56 billion), is overhauling Shire’s corporate structure to make it easier to repatriate its profits from Ireland to Japan.

Takeda is led by Christophe Weber who told investors in Osaka on Wednesday that it plans to liquidate Shire Pharmaceutical Holdings Ireland, which has assets of about $51.7 billion. All of the entity’s subsidiaries will transfer to Takeda’s existing Irish holding company. The process is expected to take until September, said Takeda.

“The liquidation . . . is part of a company-wide legal entity rationalisation programme . . . to help simplify the [combined structure] and allow for more efficient income repatriation to Takeda,” it said.

The impending liquidation of the Shire holding company will bring to an end its initially controversial 12-year tenure in Ireland. The pharma giant shocked its peers in the blue-chip British corporate establishment in 2008 when, at the outset of the financial crisis, it relocated its corporate headquarters from London to Dublin for tax reasons.

Shire was among the first of a wave of big multinationals, including several pharma companies, that made the switch after rule changes brought in by former minister for finance Charlie McCreevy a few years previously.

The FTSE 100 giant’s move to Dublin prompted fears at the time that the UK could abandon the Republic as an ally in the fight against European Union tax harmonisation.

Apart from the corporate ownership structure and dividend repatriation, there is unlikely to be a major impact from the move on the operational facilities in Ireland of Takeda or Shire.

Takeda has facilities in Wicklow and in west Dublin, while Shire is building a plant in Meath that will employ about 400 staff.

Separately, it emerged in recent days that the Revenue is pursuing Takeda for €398 million in back taxes following its acquisition of Shire.

The Sunday Times reported at the weekend that Irish tax officials contacted Takeda in November in pursuit of the cash, which the State argues is owing due to a €1.5 billion “break fee” that Shire received from another suitor, Abbvie, in 2014 after a failed takeover bid. Takeda is appealing the tax demand.