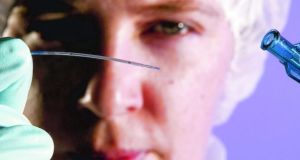 Almost all the 1,000 adults who took part in the survey agreed that the Republic should contribute to the development of new medicines.

Three out of four Irish people would help test the safety and effectiveness of new treatments if they were ill, a new survey shows.

A study backed by the Republic’s biopharmaceutical industry, which makes drugs to treat serious illnesses, shows that almost half of people believe cancer is the disease that science has the greatest potential to cure.

The survey found that three out of four people here would take part in clinical trials of newly-discovered medicines if they were ill.

Clinical trials are used to test newly-discovered medicines’ effectiveness and safety. The biopharmaceutical industry says they can save lives and improve patient care.

Almost all the 1,000 adults who took part in the study agreed that the Republic should contribute to the development of new medicines, with 80 per cent of them saying this would help the global fight against disease.

Drugmakers employ 30,000 people in the Republic, making it the second-biggest industry here after farming and food.

The Irish Pharmaceutical Healthcare Association (IPHA), Biopharmachem Ireland (BPCI) and the National Institute for Bioprocessing Research and Training (NIBRT) commissioned the survey to promote a biannual conference planned for March.

Biopharma Ambition will focus on the discovery, development and manufacture of new drugs and technology to treat disease.

About 400 people from the industry, Government and academia will attend this year’s conference, which will be the third of its kind.

Matt Moran, director of BPCI, said the Republic needed to hold and build on its position as a leading biopharmaceutical manufacturer and developer.

Killian O’Driscoll, director of projects at NIBRT, called Biopharma Ambition an important staging post on the road to making the Republic a leading place for “medicines innovation and investment”.