Opvido was approved for head, neck and cancer treatment by the HSE in 2018 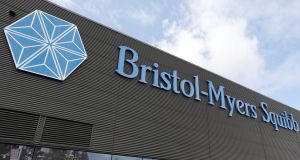 The approval by the HSE of a life-extending cancer immunotherapy treatment drug, Opvido, contributed to revenues at a Bristol-Myers Squibb company here increasing by 23 per cent to €38.89 million in 2018.

The HSE approved Opvido for head and neck cancer treatment in April 2018, and for lung cancer in September 2018.

The directors for an Irish unit of pharma giant, Bristol Myers Squibb Pharmaceuticals, state that “this has increased revenue by 23 per cent as compared to prior year”.

“Overall, the margins have improved as there were no losses associated with products which were discontinued in the current year,” they state.

The increased margin contributed to Bristol Myers Squibb Pharmaceuticals in 2018 recording a pre-tax profit of €337,139, and followed a pre-tax loss of €3.1 million in 2017.

The Dublin-based entity is a holding company and owns and manages selected non-US intellectual property rights for certain pharma products.

In a post balance sheet event, the company last year received dividends of $2 billion (€1.7 billion) from a subsidiary and distributed $2.7 billion (€2.4 billion) to shareholders.