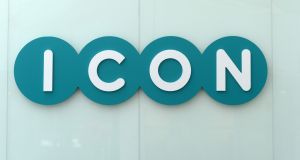 Clinical trials group Icon expects turnover to rise by up to 10 per cent this year. Photograph: Dara Mac Dónaill

Clinical trials group Icon expects turnover to rise by up to 10 per cent this year, the company said in a trading statement.

The Irish group also intends to buy back a million shares in the company during the year – about 1.8 per cent of the shares outstanding. This would be “executed opportunistically during 2020 depending on cash commitments to support M&A pipeline”.

The update, released to coincide with Icon’s presentation to the JP Morgan Healthcare conference, said sales were expected to reach between €2.97 billion and €3.1 billion this year. That marks a jump of between 5.8 and 10 per cent on the projected figures for the year just ended, which are still expected to come within the range of $2.79 billion to $2.83 billion.

Chief executive Steve Cutler said that, in addition to organic growth, the company would continue to “actively deploy capital to maximise shareholder value through a combination of M&A and share repurchases”.

Icon, which is based in Leopardstown in Dublin, employs 14,600 people at 99 locations in 40 countries. The company is due to report full year figures on February 18th.