Pharma company pays £270m to settle one of many opioid cases 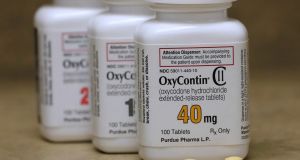 Bottles of prescription painkiller OxyContin pills, which are made by Purdue Pharma. Photograph: George Frey/Reuters

Makers of the OxyContin painkiller that has been blamed for fuelling an epidemic of opioid abuse have settled their first in a series of lawsuits brought by individual American states, agreeing to pay Oklahoma $270 million to support research and the treatment of addicts.

Purdue Pharma and its owners, the Sackler family, did not admit guilt in the civil settlement. But it marks a turning point in the nationwide effort by local governments to force the pharmaceutical group to pay for the skyrocketing heathcare costs blamed on opioid addiction.

According to the US Centers for Disease Control and Prevention, more than 183,000 Americans died from an overdose involving a prescription opioid between 1999 and 2015. The number of annual fatalities has quadrupled over the same period.

Purdue has hired restructuring experts and said it was considering whether to file for bankruptcy, while members the Sackler family, once one of the largest arts benefactors in both the US and Britain, have found their donations turned away by big galleries disconcerted by their role.

Dr Craig Landau, chief executive of Purdue Pharma, applauded Mike Hunter, the Oklahoma attorney general, for making the agreement possible. “Purdue is very pleased to have reached an agreement with Oklahoma that will help those who are battling addiction now and in the future,” he said.

The company will pay $102.5 million for a National Center for Addiction Studies and Treatment to be established at Oklahoma State University in Tulsa, plus $20 million in medicines to support treatment.

Another payment of $72.5 million will go to cities and counties in the state as well as to cover litigation costs, according to a person familiar with the settlement, with any left over funds going to the centre.

The Sackler family, who were not named in the lawsuit, separately pledged $75 million in support for the centre at Oklahoma State over five years. The Sacklers have pushed back against recent scrutiny of their involvement with opioids.

“The recent attacks on our family are not accurate and misdirect attention away from crucial issues, such as the terrifying rise in illicit fentanyl overdoses,” they said in a statement.

The family said that the agreement is “not a financial model for future settlement”, but will create breakthrough innovations in prevention and treatment of addiction.

The company faces more than 1,000 lawsuits over its role in the crisis, including from 35 other states. This latest wave of litigation comes a decade after it was sued over alleged deceptive marketing practices by the US justice department. That resulted in a fine of $634.5 million.

The Oklahoma trial, set to start in May, will continue against the other defendants, Johnson & Johnson and Teva Pharmaceuticals. The defendants earlier this week lost their attempt to push back the start of the trial by 100 days.

“A trial is important because the public will be able to learn not just what J&J did but also what Purdue did,” said Andrew Kolodnky, co-director of opioid policy research at the Heller School at Brandeis University.

The Oklahoma lawsuit accused the companies of playing down the risk of addiction from their products while overstating benefits. It sought more than $20 billion in damages. – Copyright The Financial Times Limited 2019