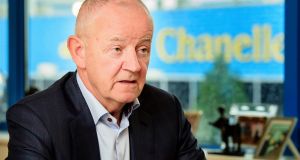 New accounts filed by Chanelle Pharmaceuticals Manufacturing Ltd show that the business recorded a 144 per cent increase in pretax profits after revenues grew by 16 per cent to €45 million in the 12 months to the end of April 2018.

The company last year paid a dividend of €2 million, having made a dividend payment of the same value in 2017.

The main activity of Chanelle Pharmaceuticals Manufacturing Ltd is the manufacture and sale of veterinary and medical pharma products worldwide.

The directors noted that revenues increased on the previous year and that they would make “every effort to improve profitability going forward”.

Shareholder funds at the end of last year totalled €7.62 million that included accumulated profits of €5.3 million.

Numbers employed at the Galway company increased from 242 to 281 last year, leading to staff costs rising from €11.1 million to €13 million.

RTÉ dragon Chanelle McCoy, daughter of Mr Burke, sits on the Chanelle board.

A breakdown of the company’s revenues show that it generated revenues of €25.6 million in the Republic, €16.3 million in Europe and €3 million in “rest of world”.