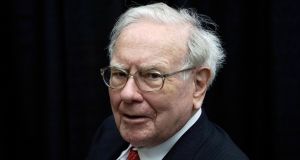 Warren Buffett’s Berkshire Hathaway Inc said on Friday it would pay $9 billion to pick up the parent of Texas power transmission company Oncor Electric Delivery Co from bankruptcy, stepping up its pursuit of steady returns in utilities.

If the all-cash deal is approved by a bankruptcy judge and Texas regulators, it will hand Berkshire ownership of one of the largest US electricity transmission companies. Texas regulators shot down two previous deals to sell Oncor to other companies.

Buffett and Abel did not respond to requests for interviews.

Dallas-based Oncor delivers power to more than 3.4 million homes and business through roughly 122,000 miles (196,000 km) of transmission and distribution lines. It is 80 percent owned by Energy Future Holdings, which Berkshire has now agreed to acquire.

Oncor posted $431 million of profit in 2016, and similar sums in the prior three years.

Regulators had asked for Oncor to be ringfenced so that it does not assume new debt from its acquirer and does not pay out too much cash as dividends.

Berkshire expects Friday’s purchase to close in the fourth quarter. It said the transaction implies an equity value of about $11.25 billion for Oncor.

1 Fair deal? Family at odds with hospital and each other not so sure
2 Ten of the most mysterious aircraft disappearances
3 EU farming subsidies deal criticised as insufficiently green
4 Central Bank finds litany of shortcomings in fund firms
5 AIB settled Citigroup dispute over Rusnak at fraction of $872m claim
6 ‘I hate haggling because I hate when people do it to me’
7 Roll up, roll up: capitalism will drive cannabis legalisation in Ireland
8 Monsoon landlords win challenge over creditors arrangement that cut rents
9 Stepping in when fire hit a rival was key to securing large contracts
10 Prominent Dublin pub baron’s group to open other new boutique hotels in 2018
Real news has value SUBSCRIBE