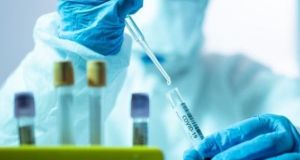 Trinity Biotech is also working on a rapid point-of-care Covid-19 test to detect antibodies to the virus that can be run in 12 minutes.

Irish-founded Trinity Biotech has begun selling its Covid-19 antibody test in the US and expects to obtain a CE Mark allowing the product to be sold in the European Union shortly.

The medical diagnostics company, which is listed on the Nasdaq, filed a fast-track submission for its Covid-19 IgG ELISA with the US Food and Drugs Administration in August and while still awaiting approval, has been granted emergency use authorisation to begin selling the product.

The test, which will determine which individuals have been exposed to the Sars-CoV-2 virus in tests, has demonstrated specificity in excess of 98 per cent and sensitivity in excess of 95 per cent, in samples of 14 days or more from symptom onset.

Shares in the company were up 4.6 per cent in early trading following the announcement.

Trinity Biotech is also working on a rapid point-of-care Covid-19 test to detect antibodies to the virus that can be run in 12 minutes using one drop of blood procured by finger prick.

In addition, it also has a viral transport media product, Flexitrans, which is used for Covid-19 sample collection for testing that Trinity said was in heavy demand. It said it had scaled up the manufacturing of Flextrans at a number of facilities.

Trinity Biotech develops, manufactures and markets diagnostic systems for the point-of-care and clinical laboratory segments of the diagnostic market. Its products are sold in more than 110 countries, and it employs more than 500 people.

The company, headquartered in Bray, Co Wicklow, on Tuesday announced a 30.2 per cent rise in third quarter revenues to $32 million (€27 million). A breakdown shows clinical laboratory sales for the quarter jumped 45 per cent during the three months, from $20.7 million to $29.9 million, while point-of-care revenues, declined 48 per cent to $2.1 million from $3.9 million.

Gross margin for the quarter was 52.4 per cent, compared to 41 per cent a year earlier with the increase largely due to the impact of Covid-19 related sales, fewer instrument placements and lower depreciation.

Operating profit increased from $1.3 million to $9.1 million for the quarter, representing close to a sevenfold increase compared to the same period last year. Earnings rose to $10 million.

Trinity said Kevin Tansey is to step down as chief financial officer at the end of 2020 with John Gillard named as his successor.

“We expect that fourth quarter revenues will show a further return towards pre-Covid levels combined with continued strong demand for Covid related products, demand for which is anticipated to continue well into 2021 and potentially beyond,” said chief executive Ronan O’Caoimh.