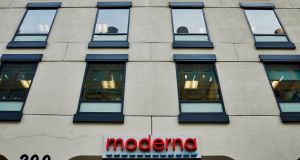 Moderna is likely to file its vaccine next week, Morgan Stanley analysts said.

Moderna’s chief executive Stephane Bancel offloaded another $1.74 million (€1.46 million) of shares last week while the world awaits for the biotech company to be the second to file its vaccine for emergency use in the US.

Stock in Cambridge, Massachusetts based Moderna climbed as much as 4.3 per cent to $101.77 on Monday. The sale comes after Pfizer and BioNTech became the first companies to complete a submission for a vaccine to U.S. regulators on Friday. Moderna is likely to file its vaccine next week, Morgan Stanley analysts said.

The recent rally lifted Bancel’s net worth to $3.1 billion, based mainly on his 6 per cent stake in the business, according to the Bloomberg Billionaires Index.

Mr Bancel and other Moderna executives have been steadily selling off their stakes throughout the pandemic, mostly through 10b5-1 trading plans. These plans let insiders sell shares at set times and prices without facing insider trading accusations and have faced increasing scrutiny as of late.

With Pfizer’s vaccine already filed for an emergency use authorization, Morgan Stanley analysts led by Matthew Harrison expect the drug-making giant’s shot to be authorized in mid-December and Moderna’s shot within a week of that. – Bloomberg