China takes risk in rushing to use unproven vaccines 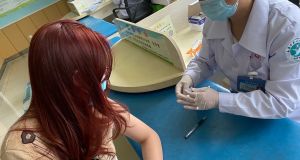 Ethan Zhang needed to get back to work. Work was in Ivory Coast, however, and since January the global coronavirus outbreak had stranded the 26-year-old translator in mainland China. Then friends told Zhang of a way he could get his hands on what might be the world’s most coveted prize: a coronavirus vaccine. Though China’s vaccine candidates have not formally been proved safe or effective, officials have been injecting them into thousands of people across the country, ostensibly under an emergency-use policy. One such campaign, his friends said, was underway in the city of Yiwu in eastern China.

Zhang took a plane to Yiwu from Beijing that night. He stood in line for four hours outside a hospital. He paid $30 (€25). He got his shot. And he expressed little worry that the substance that had been injected into his arm is still in the testing phase, an attitude that is stirring worry among global health experts.

“I feel more relieved now that I have protection,” Zhang said. “Since they’ve started using it on some people on an emergency-use basis, it shows that there’s a certain guarantee.”

China has made its unproven candidates widely available to demonstrate their safety and effectiveness to a country that has long been sceptical of vaccines after a spate of quality scandals. Government officials and top pharmaceutical executives speak proudly of being inoculated.

The campaign has succeeded perhaps too well. Yiwu’s 500 doses were consumed within hours. Other cities are limiting doses or asking people to show proof that they are travelling. The overwhelming demand has inspired a cottage industry of scalpers – called “yellow cows” in China, the people who usually score the newest iPhones or hot railway tickets – charging as much as $1,500 for an appointment.

Those users could be taking big risks. People who have taken ineffective vaccines might believe they are safe and engage in risky behaviour. They can be barred from taking another, better vaccine because they have already been injected. In a few cases in the past, unproven vaccines have caused health risks.

The potential problems often go undiscussed. Copies of the vaccination consent forms for one candidate that were reviewed by the New York Times did not specify that the product was still in testing.

“These kinds of risks have not been clearly revealed,” said Yanzhong Huang, a senior fellow for global health at US think tank the Council on Foreign Relations and an expert on health care in China. Any reports of deaths or illness could reignite mistrust in vaccines. China spent years vowing to clean up its vaccine industry after scandals. “We risk losing confidence in people if indeed adverse effects occur,” said Kristine Macartney, director of the National Centre for Immunisation Research and Surveillance in Sydney. It is unclear how many people have already received a vaccine candidate.

China has made three of its four candidates in late-stage human testing, called Phase 3 trials, available to tens of thousands of employees at state-owned businesses, government officials and company executives since July. Once Phase 3 trials are complete, the companies would submit results to the regulators of the countries that they want to sell their vaccines in. Authorities would review and assess them for approval.

Local governments have indicated that they plan to make the current vaccines available to more people. Beijing says it is keeping tabs on those who have been given the vaccines but has not disclosed any details. The contrast with the United States is stark. A growing number of polls have shown that many Americans would not take a coronavirus vaccine, which could imperil efforts to stamp out the pandemic. According to a global online survey published in October in the journal Nature, respondents from China gave the highest proportion of positive responses when asked if they would take a “proven, safe and effective vaccine.”

“In China, there’s this trend of ‘everyone is getting it, so I want it, too,’” said Jennifer Huang Bouey, a senior policy researcher at the RAND Corp. “Their problem is different from the US. They probably have to think about how not to create a riot when getting a vaccine, not so much how to try to roll it out.”

Chinese officials have defended making vaccine candidates available. Zheng Zhongwei, a top official at China’s National Health Commission, said last month that the move was a “very necessary means of protecting peoples’ lives and health,” given outbreaks abroad. Last week, Sinopharm’s chairman, Liu Jingzhen, announced that some 100,000 people have taken the company’s vaccine and none have shown any adverse reactions so far. He said that 56,000 of them had travelled abroad after taking the vaccine and none had been infected.

China’s drive has taken nationalistic overtones, with many celebrating the fact that the country has candidates in late-stage trials.

Wang Mingtao, 43, an employee in a gold mine company in Ghana, posted a video on Douyin, China’s version of TikTok, of people lining up to get the vaccine at the Beijing headquarters of Sinopharm, the state-owned Chinese drugmaker, with the slogan: “My country is powerful.”

Wang, who travelled to Beijing from the northern city of Xian, said he was not worried about taking an experimental vaccine. He paid $150 for the vaccine, made by a Sinopharm subsidiary, the Beijing Institute of Biological Products. The doses are not always being administered the way they should. On September 26th, Wang received two shots, one on each arm. The two doses are meant to be given 14 or 28 days apart. Wang said he was in a rush to travel and did not want to come back to Beijing.

“The country says this vaccine is OK,” he said, “so I think it is better to just take it.” Liu said that “under special circumstances,” the two doses could be delivered at the same time, on each arm, according to the Guangming Daily newspaper. The two shots are supposed to be administered days apart to generate a stronger immunity response, said Clarence Tam, an assistant professor at the National University of Singapore’s Saw Swee Hock School of Public Health who researches vaccines.

The early releases have helped highlight one potential problem: deploying an approved vaccine. Demand is so high that the government and companies could struggle with distribution both at home and in other countries that Beijing has promised the treatment to.

Wendy Zhang, 26, a medical worker from the eastern city of Jinan, said she had to wait 57 days to get her second shot of a vaccine in October because the candidates had run out. She said she had felt relieved after getting it. “There has been no adverse reaction after the vaccination, indicating that the safety of the vaccine developed by China is beyond doubt,” Zhang said.

“European governments do not take Covid as seriously as our Chinese government.”

Eden Huang, 19, a student who recently arrived in Amsterdam, tried to sign up four times when Sinopharm said it was allowing students to register their interest in getting a vaccine. He also called various hospitals across Zhejiang province but to no avail.

“I am very anxious,” Huang said. “European governments do not take Covid as seriously as our Chinese government.” Huang said he was not worried about any safety issues, citing reports that the vaccines have been tested in more than 60,000 people in trials.

“This vaccine would do me more good than harm,” he said. For those out of luck, there are always the scalpers. For a fee ranging from $600 to $1,500, they can book vaccine appointments, they say. Many were cagey about how they were able to book these appointments. A scalper called Mr Li, who declined to give his full name for fear of punishment from authorities, said that he cooperated with companies and that he booked the appointments with Sinovac, a private firm with a vaccine in late-stage trials, through these companies.

“Some people have been especially grateful to me for helping them,” Li said, though he fretted that he could be doing something illegal. Others were more circumspect about getting the vaccine. In Shaoxing, a city that also recently offered people access to the vaccines, He Meili, a taxi driver, said her company had told her and others that it could help arrange for them to get the treatments for $120. “I’d like to wait and see,” He said. “I’m still a little worried.” – New York Times Service