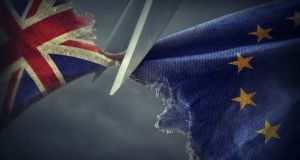 Proposals put forward by a UK group to find “alternative arrangements” to the backstop “would kill firms, damage consumers and inflict a level of surveillance on to Border communities which doesn’t have their consent,” one of the North’s largest business bodies has warned today.

Manufacturing NI, which represents some of the North’s largest employers including Bombardier and Randox Laboratories, said latest proposals from the Alternative Arrangement Commission (AAC), which is a non-government, private organisation set up and led by British MPs, would “re-establish barriers” and “fundamentally disrupt the all-island economy”.

The AAC said its objective is to “develop credit and practical alternative arrangements relating to the Irish border that can be delivered in a timely fashion”.

But Manufacturing NI says some of the proposals in the AAC’s latest interim report would “offer much less protection to NI” not just in relation to its trade with the EU but also with the rest of the UK.

The AAC advocates trusted traders’ schemes which it says would reduce the need for cross border inspections of goods and has also suggested that warehouses could be established to carry out any necessary custom inspections.

It has also recommended that new economic zones could be established that would encompass the border and special mobile teams be set up to carry out any necessary inspections potentially on company premises.

But Manufacturing NI believes that the AAC’s proposals would simply create new costs and complexities for Northern Ireland businesses that have “neither the capacity, experience nor capital required to deliver untested solutions”.

In its report the business organisation highlights the example of how the UK’s Department for Environment, Food and Rural Affairs charges £200 (€223) per health certificate to accompany goods. That’s on top of customs documentation, certificates of origin and other documents.

In Northern Ireland the equivalent Department of Agriculture, Environment and Rural Affairs does not hold any legislative right to charge.

But Manufacturing NI outlines one potential scenario in its report, which shows that for seafood alone in the Newry and Mourne Council area, 60,000 certificates are required. This it says would work out at “60,000 x £200 = £12 million for just seafood in just one council area”.

The organisation states that its position is that Northern Ireland should be “a bridge rather than a border” between the UK and the EU after Brexit and as result it would not support the AAC’s proposals.