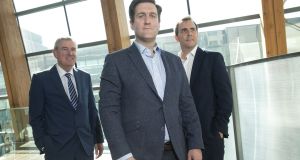 Brian Shields of Neurent Medical has been announced as high-potential start-up Founder of the Year 2019 at Enterprise Ireland’s awards. To the left is Kevin Sherry of Enterprise Ireland and to the right is Kevin Foley of Grant Thornton. Photograph: Orla Murray

Mr Shields was presented with the award at an event in Dublin on Wednesday evening.

The Founder of the Year award is meant to acknowledge and celebrate the commitment that entrepreneurs and start-ups have made to build world-class companies of the future.

There were nine finalists for this year’s awards, all of whom were voted for by more than 200 peers who participated in the State body’s High Potential Start-Up (HPSU) Founders Forum.

Neurent Medical, which is based in Oranmore, Co Galway, was founded by Mr Shields and David Townley as a spinout from the BioInnovate Ireland programme at the National University of Ireland, Galway.

The company, which last year raised €9.3 million in a series-A round, is focused on developing a medical device that would allow doctors treat patients with rhinitis in their offices, rather than in a surgical setting.

Rhinitis is an inflammatory disease of the nose – leading to congestion and rhinorrhoea or runny nose – which is reported to affect up to 40 per cent of the population, making it the fifth-most common chronic disease in the United States. Neurent estimates that rhinitis accounts for $15 billion (€12.9 billion) in direct healthcare costs per year, mostly in prescription medication.

The Founder of the Year winner was decided by a judging panel which included representatives from Enterprise Ireland, Ergo, Grant Thornton, Google and Atlantic Bridge.

1 Why gift a son now if it eats into his tax-free inheritance threshold?
2 Mortgage arrears: Prevention is definitely better than cure
3 Big Four told to outline plans for audit split in UK by October
4 Chris Johns: Economic self-harm is the root of populism
5 Irish pharma sector warns of protectionism as US corners supply
6 Stocktake: Playing poker with the day traders
7 Aryzta needs to sell €600m of assets to reset business, shareholders claim
8 Government to avoid ‘cliff-edge’ on Covid-19 payment changes
9 US stocks climb after huge rally in Chinese shares
10 Global markets surge after positive economic news from China
Real news has value SUBSCRIBE