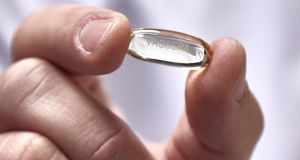 Shares in US-listed Irish biotech Amarin surged in New York after it upgraded its profit forecasts. A strong update for the prospects of its cardiovascular treatment candidate Vascepa saw the stock leap close to 15 per cent higher to over $22 after lunch on Wall Street in volumes that were close to five times its daily average.

The company said it was raising its guidance for sales in the full year to a range of $380 million to $420 million. That is a jump of between 8.5 Per cent and 20 per cent on previous guidance for revenues in the region of $350 million.

“Forecasting Vascepa revenue levels at this early stage remains difficult,” the company said, although it acknowledged that sales in the first half had exceeded expectations.

“While Amarin remains optimistic that Vascepa will generate billions of dollars in revenue in the years to come, the history of other therapies for chronic conditions suggests that growth builds over multiple years, and thus the company is not prepared to provide quantified guidance regarding revenue levels beyond 2019,” the company said.

Alongside the profit upgrade the company said it was also moving to double the size of its US salesforce by October, with recruitment already under way.

And it said that it was on track for a decision by the US regulator, the Food and Drug Administration (FDA), at the end of September to broaden its label to allow it to market the drug for cardiovascular therapies. The FDA has granted fast-track priority review to the drug.

The company said it had accelerated the timing of the expansion of its salesforce in part because the drug had secured priority review.

Vascepa is aiming to become the first prescription drug for people at risk of stroke or heart attack who continue to have high levels of harmful blood fats, called triglycerides, despite being on treatment with statins.

“We are pleased with the progress made to date, including the significant revenue growth we’ve achieved for Vascepa,” said chief executive John Thero.

“We anticipate Vascepa revenue growth to accelerate further after label expansion approval and with a larger sales team, and then again after we commence promotion of Vascepa for cardiovascular risk-reduction on television and through other media.”

The Amarin upgrade follows a strong increase for the company’s purified fish oil drug Vascepa, which delivered record results in the first half of the year.

Unaudited sales figures for the second quarter show sales of between $97 million and $101 million. That represents year-on-year growth of roughly 90 per cent, and would bring first-half sales to between $170 million and $174 million – an increase of around 78 per cent on the first half of 2018.

It confirmed that it plans to seek European approval for the drug later this year.