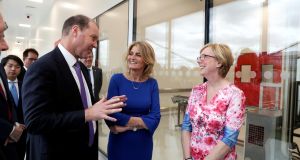 The €40 million plant will be used to manufacture global supplies of the company blockbuster drug Ninlaro, an oral medicine that is used in combination therapy to treat multiple myeloma, a type of white blood cell cancer. It is Takeda’s only active pharmaceutical ingredient (API) plant outside Japan.

Construction of the plant began in June 2017, and its opening will create 40 jobs in the facility which houses all steps of the production process – from API, making the drug and packaging for supply to global markets.

Takeda chief executive Christophe Weber said Takeda had built up a strong foundation in Ireland over the past 17 years.

“This new plant in Grange Castle is an important strategic site for us as it is not only the first overseas manufacturing centre for APIs outside of Japan, but it houses all the steps of the production process.”

He said it would help the company to “concentrate our efforts on breakthrough innovations”.

IDA Ireland executive director Mary Buckley said: “This innovative manufacturing site not only highlights Takeda’s commitment to Ireland, it also showcases how competitive Ireland is for global enterprise and investment.”

To honour the Japanese origins of the company the Japanese ambassador to Ireland, Mari Miyoshi, unveiled a symbolic wooden sun dial at the event.

In addition to the grand opening, Takeda also used the opportunity to showcase another Grange Castle project. The company is investing €30 million in what will be the first commercial scale cell-therapy production facility in Ireland.

Like the Ninlaro plant, all stages of the production process from the receipt of donor material to packaging will be managed onsite.

1 How long can Government afford to keep State pension age at 66?
2 Paul Coulson plans record $1.8bn Ardagh investment
3 Black Friday has become Black November for Irish retailers
4 Level 5: How much will this lockdown cost us?
5 Google's incredible power is the result of decades of regulatory failure
6 Ikea seeks to build a new version of itself
7 JP Morgan Ireland’s profit doubles to $16.5 million
8 Supermarkets gear up for winter lockdown
9 Irish start-up Wayflyer raises €7.8m in seed funding
10 Brexit: UK and EU agree to intensify talks in rush for deal
Real news has value SUBSCRIBE