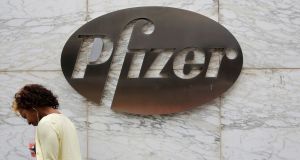 The Workplace Relations Commission has issued a new proposal that further improves the terms on offer to workers based at two Pfizer plants in Cork. Photograph: Andrew Kelly/Reuters

Staff of multinational drugmaker Pfizer face a make or break vote on pensions in the coming weeks.

About 400 staff have been battling company plans to close their non-contributory defined benefit, or final salary, pension scheme.

The workers, based at Pfizer plants in Ringaskiddy and Little Island in Cork, have already rejected a Labour Court recommendation overwhelmingly back in March 2018.

Now, the Workplace Relations Commission has issued a new proposal that further improves the terms on offer.

But, according to reports, it has warned both Siptu and fellow union Connect – formerly the Technical Engineering and Electrical Union (TEEU) – that it considers the new package to be the “absolute limit of what can be achieved”.

Where the company was previously prepared to allow staff over the age of 50 to stay with the final salary scheme for 15 years (ie up to retirement), it has now offered that 15-year window to all staff. That is up to five times the transfer time it had previously allowed younger staff.

Staff staying with the final salary scheme will have to start paying contributions into their retirement plan but,where this was due to start immediately – with a 1 per cent contribution in Year One rising to 5 per cent in Year Five – the company will not now seek contributions for the first three years of the new arrangement, the trade publications reported.

A lump sum payment to all staff to recognise that they will now have to contribute to their pensions has also been doubled to €20,000. It can be taken either as an additional tax-relieved contribution their their pension savings or as cash, in which case it will be taxed as income.

A further incentive payment will be made when staff transfer to the new defined contribution scheme.

There are about 1,000 active members of the schemes affected spread across four Pfizer plants. However, it is union members at the two Cork plants that have most strongly opposed the new arrangement.

The WRC has asked unions to let it know by the end of July what is the outcome of union ballots on the issue, according to IRN.

Neither side was willing to talk yesterday but Pfizer did issue a short statement, saying the proposals were acceptable to the company and it now “awaits the results of the trade unions’ ballots”.