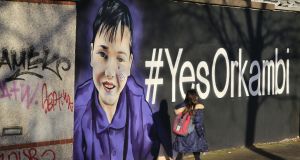 The drug Orkambi, made by Vertex Pharmaceuticals, was approved for use in the Republic after a campaign by people with Cystic Fibrosis and their families. Photograph Nick Bradshaw

Cystic fibrosis drug Orkambi has delivered a healthy return for the Irish arm of Vertex Pharmaceuticals.

Sales jumped 71 per cent at the group last year, according to results just filed with Companies House, for what was the first full year of operation since the Irish Government approved Orkambi for sale in the Republic following an intensive campaign from people with cystic fibrosis (CF) and their families.

The Government gave the green light to the breakthrough drug in June 2017. That helped Vertex grow sales 47 per cent in 2017 to just shy of €35 million. However, that jumped to €60 million last year.

In their report, the directors note that the increase in revenue is “predominantly” due to increased Orkambi sales . The company initially supplied the drug to 500 Irish CF patients over the age of 12 who have the F508del gene mutation, the most common form of the disease.

The drug was made available to six to 11-year-olds from March 2018. In January this year, it was announced that 70 younger patients between the ages of two and five would also be given access to the drug.

CF is an inherited disease that primarily affects the lungs and digestive system of about 1,300 children and adults in Ireland. It causes the body to produce a thick, sticky mucus that clogs the lungs and obstructs the pancreas. It also stops natural enzymes from helping the body break down and absorb food.

There is no cure. Ireland has one of the highest rate of CF in the world, with the incidence estimated at about four times the average for Europe.

Orkambi costs around €159,000 per patient. The HSE estimated it will cost some €400 million over five years.

That rises to €650 million when another Vertex CF drug, Kalydeco, which is also used by Irish patients with a different gene mutation, is taken into account.

In total, almost 900 Irish patients rely on the Vertex drugs.

Operating profit was 73 per cent higher at the business last year, at €1.8 million.

However, that was more than offset by a foreign currency charge of more than €2.4 million, which dragged the company back to a pre-tax loss for the year of €1.6 million.

The company is significantly affected by foreign exchange volatility, In 2017, that had delivered a €8.1 million boost to the bottom line.

Vertex says that it has taken steps to address the prospect of a hard Brexit last this year. From March 1st last, the Irish business assumed responsibility for supplying the company’s drugs to EU markets. Previously this had been managed by its immediate parent Vertex Pharmaceuticals (Europe), which is based in the UK.

The company has also made wholesale changes on the board of the Irish business, with three existing directors resigning between October last year and February of this year. They were replaced with three new appointments. A further director, appointed last October, has also since resigned.