Moderna vaccine will help but it’s not the solution

Ireland needs to more than double pace of vaccination 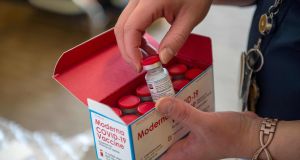 Moderna is unlikely to be a game changer in the fight against the pandemic – for now at least. Photograph: AFP via Getty Images

The approval of the Moderna Covid vaccine on Wednesday gives European governments another tool to try to suppress a surge in the virus that has led to strict lockdowns in many countries, including Ireland.

But Moderna is unlikely to be a game changer in the fight against the pandemic – for now at least.

This is the company’s first regulated product and it has had to outsource supply and delivery of the vaccine as it tries to scale up manufacturing. Initially, at least, its main focus is on the US market.

The green light had been expected yesterday but the Boston company was still unable to give any detail on when shipments would start to arrive, with what regularity and containing how many doses. That’s a lot of unknowns for an approved treatment for a pandemic.

It is also, by some distance, the most expensive of the various vaccines approved or heading towards market.

For all these reasons, it seems likely that only an eventual sanction for the AstraZeneca/Oxford University vaccine, probably next month unless derailed, will be the trigger for a dramatic increase in the pace of inoculation programmes across Europe.

There has been much criticism to date of the pace of vaccination but the fact is that, to date, supplies are limited. The Government expects to receive 40,000 doses a week of the only vaccine currently available – the Pfizer/BioNTech version.

At that scale, and given that people receive two doses three weeks apart, only about 160,000 people will be immunised over the current six-week lockdown – and half of those will only have had one of the two doses required. That’s just over 3 per cent of the population when we aspire to once again open up the economy.

To have any hope of vaccinating all the adult population by the end of October, Ireland will have to more than double the rate of vaccinations per week from now. Moderna will help but more will be required.